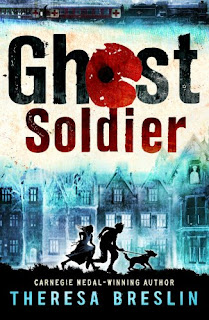 Posted by Philippa Werry at 22:47 No comments:

The Great War: stories inspired by objects from the First World War 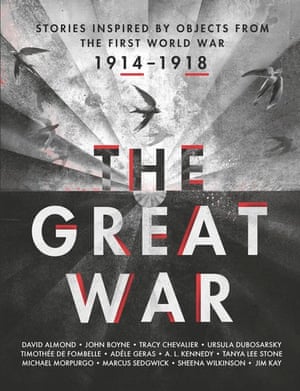 Synopsis
This anthology contains stories by English, American, French, Irish and Australian authors. Each author uses a particular object as the inspiration for a story about the First World War. The objects include items belonging to individual soldiers – a helmet, a writing case, a compass. Some are printed material: sheet music, school magazines, a recruitment poster.  There is a French toy soldier, the nose from a Zeppelin bomb and a Victoria Cross and a Princess Mary gift box. One of my favourite items was a hand-painted war time butter dish.

Some stories are set in the present day (a school history trip to the battlefields), others in the past. A number of them have girls as the main characters. One is a sort of ghost story. One is written as a poem. Many are firmly based in family life. As in all anthologies, some stories work better than others, but all are of a very high standard.

The pages at the end of the book contain biographical information about the contributors and pictures of their chosen objects. From the picture credits, you can work out where most of the objects come from (many are held in the Imperial War Museum), but I would have liked some more information about how the authors chose the object they wrote about. (This article in the Guardian shows some of the objects.)

About the illustrator
Interesting random facts: Jim Kay won the Kate Greenaway Medal in 2012 for his illustrations for A monster calls by Patrick Ness and was chosen by J.K. Rowling to illustrate the full-colour editions of the Harry Potter series. Here they are!

And here he talks about his illustrations for The Great War.

Other books you might like:
War girls is another recent collection of war-related short stories. The curioseum, although not war- related, is another example of using museum objects to spark a story.

Things I didn’t know
The country you call home by John Boyne describes the fierce debate amongst the Irish about whether they should support England in the First World War, when for years they had been fighting to get England out of Ireland.

The words that struck me most were from A world that has no war in it by David Almond, a story about a long-running neighbourhood feud.  Near the end, the narrator is talking about all the wars that feature on the news every day. “Are we daft?” he asks. “Are we evil? Is it just the way we are? Are we acting out something that started with our ancestors? Is it in our bones and blood? Do we go to war because we’re in love with war? Will we be asking those damn questions till the very end of time?”

The words stayed in my mind because I think a lot about writing books about war for children, and why we do it and what we are trying to say. Surely we want our readers to reflect on the futility of war, but as David Almond says, the wars just keep happening.

Posted by Philippa Werry at 19:44 No comments: 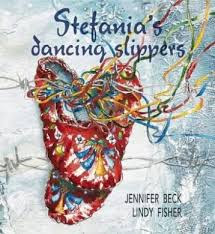 Synopsis
This book won a silver medal for Best Picture Book of all Ages at the Moonbeams Children’s Book Awards in the United States.

Stefania is a young girl who loves to dress up and dance, but her life changes forever when war comes to Poland in December 1939 and her father leaves to join the army. When Stefania and her mother are ousted from their house by Russian soldiers, she slips into her pocket her most treasured possession: her dancing slippers.

Along with many other Polish families, they are put on a crowded train and taken to a camp in Siberia. Later they have a long, difficult journey south to Persia.  Finally, in 1944, Stefania – but not her mother – arrives by ship in Wellington, where, along with other children, she finds a new home in the Polish camp in Pahiatua.

The book includes a map of Stefania’s travels at the front, and a historical note at the back about the Polish children of Pahiatua.

Reviews:
This review calls it a “moving tender historical fiction” which has depth, feeling, sadness and joy.

Questions:
If you were given only 30 minutes to leave your house, like Stefania, what would be your most treasured possession that you would take with you?

About the author:
You can read an interview with Jennifer Beck on the Christchurch City Libraries website, and another one on the NZ Book Council site.

About the illustrator
You can read about Lindy Fisher on the Storylines website, and also on the NZ Book Council site. She also has her own website (interesting fact: Lindy has had over 75 stamps published by New Zealand Post!)

Other books you might like:
Jennifer Beck is the author of the much-loved picture book The bantam and the soldier (illustrated by Robyn Belton). She and Lindy Fisher have worked together on other books, including A present from the past (about the Christmas boxes given to the soldiers by Princess Mary in World War One) and Remember that November (about Parihaka).

A Winter’s Day in 1939 (Scholastic, 2013) by Melinda Szymanik tells the story of 13-year-old Adam, who lives with his family on a small farm in rural Poland. In 1939, war breaks out and the Russians invade Poland and confiscate Adam’s family’s house and farm. They are sent to live with another family nearby, but are then moved on and put on a train for a Russian labour camp as refugees, prisoners of Russia.

NZ connections:
The 70th anniversary of the arrival of the Polish children was marked by a reunion in Wellington in October-November 2014. The reunion's facebook page gives more information.

NZ on screen also shows a 1966 documentary on The story of Seven Hundred Polish children.

You can find out more about the Polish children who came to Pahiatua on Te ara and also on the Polish Heritage Trust Museum website.

Posted by Philippa Werry at 21:26 No comments: