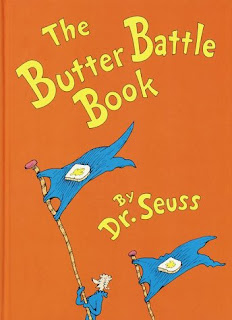 Synopsis
Written in Dr Seuss’ usual zany rhyming style, this book tells the story of two neighbouring communities – Yooks and Zooks – who are divided by their differing opinions on the best way to butter their bread. Things get more heated, and following an initial exchange with a slingshot, the Boys in the Back Room dream up bigger, crazily-named and ever more powerful weapons.

But it’s also a metaphorical look at The Cold War (after all, it’s surely no coincidence that “Yooks” and “Zooks” sound like “Nukes”, and that they are divided by a Wall.) As I got closer to the end, I wondered how it was going to finish and whether the escalating situation could be resolved – but it ends on top of the wall in a situation of total uncertainty.

You can read the whole text online here.
Or you can watch it on YouTube.

Reviews:
The Teach Peace Foundation calls it an “anti-war…children’s rhyming story addressing fears from the cold war era during which it was written. Specifically it deals with the nuclear war and the possibility of mutually assured destruction”. The website has some suggested teaching notes.

Questions:
Does it matter which way up your butter your bread?
What are some equivalent differences between people in today’s world? (Which way do you...?)
The Teaching Children Philosophy site also poses lots of good questions arising from this story.

About the author
Everyone knows Theodor Seuss Geisel (1904-1991) in other words, Dr Seuss!
Some things I didn’t know about him –

Find out more about him here.
And see more of his art here.

Other things I didn’t know
According to the Teach Peace Foundation, this book “was censored and taken out of public libraries for its obvious statements against the arms race between the United States and the Soviet Union.”

Other books you might like:
Other anti-war picture books include The story of Ferdinand by Munro Leaf, The general by Janet Charters, illustrated by Michael Foreman, and Bravo! by Philip Waechter and Moni Port.

Have you read it?
Have you read this book? Let me know what you think!
Posted by Philippa Werry at 23:16 No comments:

A day to remember: the story of Anzac Day by Jackie French, illustrated by Mark Wilson

A day to remember: the story of Anzac Day by Jackie French, illustrated by Mark Wilson (Angus & Robertson, 2012)

Synopsis
This book tells the story of Anzac Day by tying the date of 25 April to specific events in particular years, starting with the first landings at Gallipoli on 25 April 1915. The first Anzac Day parades and services are held in 1916; in 1918, the war still continues, but it is over by 25 April 1919. In the late 1920s, the tradition of the dawn service begins; in the 1930s, many returned soldiers are suffering through the Depression. Anzac Day continues to be marked through World War Two, the Korean War and the protest years of the Vietnam War.

The book continues up to the present day through Australian involvement (again often controversial) in other wars, such as in Iraq and Afghanistan, and traces the increased interest in visiting Gallipoli for the dawn service at Anzac Cove.

Teacher’s notes include Jackie French talking about her inspiration for the book, and Mark Wilson talking about his technique and how he interpreted his task. The figures on the cover are his son and granddaughter – how lovely is that?

Reviews:
Kids Book Review recommends it highly, saying that "You know a book by Jackie French is going to be researched to the nth degree, and presented with clarity, emotion and fascination - and A Day to Remember is no exception."

The never-ending bookshelf says is it is a picture book that adults would enjoy and learn from as well; "What I found particularly interesting with this book was the way that Jackie French focused on the concept and meaning of Anzac day through various generations and the way that it was developed, shaped and then lessened in meaning before reaching height again today." This reviewer suggests it is not for young children under 8, "as it is very heavy on the history and less narrative based".

Author’s website
Jackie French is an amazing writer with a brilliant website which features a page on this book. Her other war-related books include The beach they Called Gallipoli, Pennies for Hitler and A rose for the Anzac boys.

Illustrator’s website
Also by Mark Wilson on this blog is My Mother's Eyes: The Story of an Australian Boy Soldier.

NZ connections:
Are we mentioned? Yes, often (thanks, Jackie French!) Sometimes the New Zealanders are left out of (Australian) books on Anzac, so it’s good to see their contribution recognised.

I also appreciated seeing the Aboriginal and Torres Strait Islander soldiers acknowledged, men who “fought long ago in the service of a land where many were not even allowed to vote”.

Have you read it?
Have you read this book? Let me know what you think!
Posted by Philippa Werry at 13:13 No comments: