24 pages with full and half page illustrations 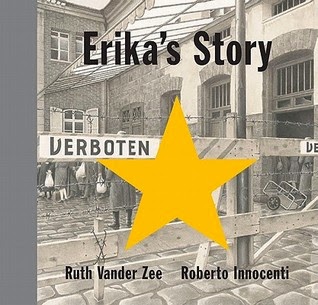 Synopsis
Two things struck me about this book. The first was the unusual cover with a cut out star showing the yellow of the page behind. The second was how short it was. In fact it's possible to find the whole story online, and it’s probably less than 1000 words – but then you would miss the full impact of the illustrations.

Having said that – the illustrations are also online, on the Children’s book illustration blog. (I’m not sure who runs this blog and it seems slightly odd to have all these lovely pictures online. Hopefully it’s all legal and he/she has got copyright permission to do so.) 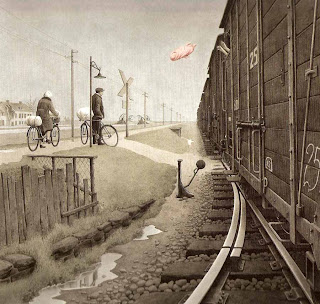 The book begins with an Author’s note in which Ruth Vander Zee tells how "in 1995, the fiftieth anniversary of the end of World War II, I met the woman in this story." After that, it morphs into Erika’s story, which in many ways is a story about the unknown – because Erika doesn’t know the date of her birth, her birth name or anything about her birth family. All she knows is an act of love and sacrifice that saved her as a baby, from the fate that awaited everyone else on the train.

Reviews:
This review on the blog called A picture's worth a thousand words makes some interesting points about the use of colour and the style of the illustrations.

Author’s website
Ruth Vander Zee grew up in Chicago and now lives in Florida. Her website showcases the books she has written, including Eli remembers about a family's links back to Eastern Europe before the war.

Info about the illustrator
Roberto Innocenti, born near Florence in 1940, is not an illustrator I’ve heard of before but that must be my mistake as he is he is apparently very well regarded and his picture books have been published throughout the world.

New Zealand connections:
The Holocaust Centre of New Zealand is on Webb St, near the top of Willis St in Wellington,
It is open 10.00 am to 1.00 pm Monday to Friday and Sunday, closed Saturday and Jewish Holidays, or you can email to arrange a visit.

Posted by Philippa Werry at 00:26 No comments:

120 pages with sepia and black and white illustrations, as well as photos, charts, newspaper clippings and postcards. 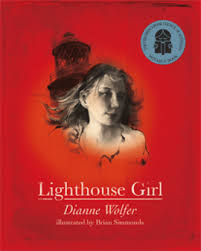 Synopsis
Lighthouse girl is based on the true story of Fay Catherine Howe, daughter of the Breaksea Island lighthouse keeper. Fay lived at the lighthouse, near Albany in King George Sound, where the first Australian and NZ troopships departed from on their way to WW1 in 1914. She was proficient at semaphore and used to take down messages for the troops and send them to their families, as their last farewell before they left Australia. There is a brief biography of her in a historical note at the back, including a description of the newspaper article that first sparked Dianne Wolfer’s interest in the subject.

In the story, Fay keeps writing to some of the soldiers, in particular one called Charlie, whom she has never met, apart from through her original semaphore messages.  From them, she finds out about the war happening a long way away on the other side of the world, until finally it impacts on her personally.

Lighthouse girl was shortlisted for the 2009 NSW Premier’s History Awards and the WA Premier’s Awards. It won the children’s choice 2010 WA Young Readers Book Awards and is an ASLA recommended reading text for the National History Curriculum.

You can see see a trailer for the book here on Youtube.

Reviews:
Aussie reviews calls this book "an amazing blend of diary, narrative, picture book and scrapbook, based on a true story" and says it provides "a gentle presentation of the coming of age of a girl during the hardships of war."

Reading for Australia has a piece by the author in which she talks about Small moments in big pictures ("I love stories about small moments that are also part of bigger historical pictures") and includes a list of Books I loved when I was young: Anne of Green Gables, Bottersnikes and Gumbles, the Little Women books (especially Jo’s Boys) and anything by Ivan Southall. His books made a huge impact on me, particularly a lesser known one called Finns Folly. It was so raw and powerful. (I remember reading Ivan Southall's books too, especially one called Ash Road about bush fires; they had a strong Australian flavour at a time when there were very few Australian or NZ children's books being published, but today you hardly ever hear him mentioned.)

Author’s website
Dianne Wolfer lives on the south coast of Western Australia, and she sounds like such a nice person! Here is her website, which includes a book trailer and teaching notes.

There is also a short bio of her on the Fremantle Press website.

Info about the illustrator
The Fremantle Press website also includes a bio of Brian Simmonds,

The May/June issue of Artist's chronicle contains a feature article in which Brian talks about Being a book illustrator. The article also discusses how Brian and other artists have come to be invited to illustrate books for Fremantle Press:

"Fremantle Press publisher Cate Sutherland said illustrations can change the way a children's book is interpreted, and is very much an integral part of the story. "It's a team effort between author and illustrator," a fact Brian Simmonds soon discovered. "There were many meetings with the author and publisher to establish the right tone of the book," he said."

Other books you might like:
Light Horse Boy, by the same author, is a companion novel to Lighthouse girl.

My book Lighthouse family is also set on a lighthouse in war time, but this is New Zealand in WW2.

You can find out more online about Albany, including centenary events held in November 1914, and about Albany and the Anzacs.

The Albany Convoy Commemorative Event took place in Albany from 31 October - 2 November 2014 to mark the 100th anniversary of the departure of the first convoy and the significant role Albany has played in Australia’s history. The schedule of activities included a RAN Ceremonial Sunset, Troop March, Commemorative Service, the opening of the National Anzac Centre and a Ship Open Day. A New Zealand Defence Force contingent also took part in the commemorative events.

Posted by Philippa Werry at 18:31 No comments: