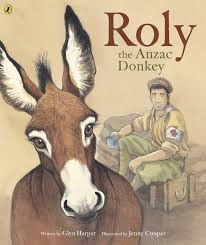 Synopsis
This is a retelling of Glyn Harper’s 2008 book, The Donkey Man (illustrated by Bruce Potter), which describes the war experience through the eyes of Roly the donkey. This version is bigger than the original and has new artwork by children's illustrator Jenny Cooper. It includes two maps (of the Aegean region and the Gallipoli peninsula) and notes on the Gallipoli campaign and the donkey man himself. A lot of people would assume this to be Simpson, but Glyn Harper tells the story of a New Zealander, Richard Alexander Henderson.

It’s interesting to see how the text has been pared back in the updated version. The main story is still there, but a lot of the background detail has been taken out. I think The donkey man still has value as a text with more detailed information, for older children, but this version makes for a stronger picture book. 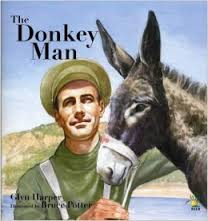 About the author
Glyn Harper is professor of war studies at Massey University and the uni website has an interview with him here. There a lovely article about the book launch here.

About the illustrator
You can read about Jenny Cooper and her work on the NZ Book Council and Christchurch City Council websites.

I liked this comment: "Funnily enough, I don’t particularly like seeing my books after they are printed, because there are so many things I would improve or change. But I keep thinking that the NEXT book will be better."

Other books you might like:
Glyn Harper has also written Le Quesnoy and Jim’s letters, both illustrated by Jenny Cooper.

Links
You can read more about Private Richard Henderson, New Zealand's own "donkey man" at Gallipoli, here on the RSA site.

Find out about the true story behind the famous painting of Simpson and the donkey. Moore-Jones painted six versions of this painting and the last one in private hands sold recently for $220,000.

Have you read it?
Have you read this book? Let me know what you think!
Posted by Philippa Werry at 13:19 No comments:

The last Anzac: questions and answers

The last Anzac by Gordon Winch, illustrated by Harriet Bailey

I was lucky enough to attend the launch of this lovely book at The Children's Bookshop, Kilbirnie, in March. You can read my review of the book here, and Harriet has very kindly agreed to answer some questions about the book, how she worked on it and her illustrating style.

The book is a lovely production and it' s interesting to see the Anzac connection (Australian author and publisher / NZ illustrator). How were you approached by New Frontier to take the job on?

Thank you! An editor from New Frontier Publishing sent an email asking if I would be interested in illustrating a picture book for them, and that it would be a ANZAC WW1 Centenary title for 2015. I jumped at the chance to illustrate a heavily referenced story and one based on a soldier who served at Gallipoli.

How would you describe your own illustrating style, and why do you think it lent itself to this project in particular?
I have a range of illustration styles and felt the light and descriptive drawing line was needed to depict the various scenes and peoples expressions. When it got to the colouring stage, the publisher originally wanted all the 1915 scenes to be produced in sepia (brown and white or black and white, as was the photography at the time) in order to have a clear contrast between past and present. I wished to retain full colour to make it visually appealing and descriptive. I wanted the oranges to be a lovely juicy orange! We compromised by having the 1915 scenes set on a darker cream background. At the launch of "The last Anzac", Ruth Paul made some fascinating comments about how well your illustrations worked to balance, and in some cases extend, the text. She used as examples the sequence showing Alec carrying the water and then spilling it when he jumps into the trench, and also the feet in the hospital beds. How do those ideas develop, and how do you decide what aspects of the story you want to illustrate?
This particular story was light on descriptive detail so I filled it in by reading as many accounts of the war at Gallipoli as I could. Books with collections of photographs of WW1 and men’s stories gave me ideas for the other soldiers that are shown. Soldiers injuries were horrific and of those that survived to be treated in the field hospitals, then the hospital ships and after that make shift hospitals in Greece and Egypt. I wanted to show men recuperating and with their wounds being looked after by ANZAC nurses. The missing limbs are sure to be noticed by children looking at the pictures.

Alec Campbell suffered many illness that kept him from sailing off to France to join the frontline but compared to his fellow patients he didn't have war wounds that were apparent until Bells Palsy appeared and 1/2 of his face became immobile.

As far as telling the story in pictures, “what happen’s next” is the major vehicle for turning pages of a picture book. I really wanted to have a sequence of illustrations to show what Alec Campbell did for the majority of the time: carrying water from the beach to inland for the soldiers who were in fighting in the trenches. Illustrating the effort and the danger of such an essential and appreciated task is the most interesting part of the story for children, I think!

I guess you haven't met the author, Gordon Winch, but do you know much about him?
I read about Gordon Winch online and discovered he has had a long career as a teacher of children and training teachers and has written many engaging and humorous books for children of Australia.

How did you go about doing the research you needed for the illustrations? (at the launch, you told a lovely story about how you pinpointed the cottage that Alec Campbell lived in.)
It pays to use as many contacts that you have available when it comes to research and it was fortunate that I have a retired Australian uncle who is a whizz at tracing things using historical records. Part of the problem of weighing heavily on the internet for information is being certain that it is accurate. I had thought Alec Campbell was in a rest home at the time of James’ visit, but the publishers assured me he was still living with his wife in her mothers cottage, address unknown.

My Uncle was able to consult Electoral Rolls to hone down on a street number using the information I provided, sourced from historian Jonathan King’s book, Gallipoli: Our Last Man Standing. I used Google Street View to take a reference image of the cottage for the illustration. I like to think I have the correct little humble home where Alec lived!

As I have mentioned there was a lot of research needed to for a historical picture book. To avoid confusion due to the backwards and forwards of time and change in narration, I learnt it was important to keep visual elements limited to that which related to Alec and the story. I made a point of contrasting Alec's two ages: his visibly apparent youth when he went to war and his advanced age that he reached after a life where he achieved so much in Australia.

After Harriet had sent me these answers, I showed the book to my sister who came up with another question - which Harriet kindly answered as well!

Did you know any more about the boy's visit to Alec, and how that came about?
This story is based on a true event with one of the publishers' sons visiting Alec Campbell. New Frontier sent me two photos of father and son sitting with Alec and his wife Kate in their living room. I don’t know how the visit came about. I imagine the boy wrote Alec a letter requesting to visit him in Tasmania. I expect that Alec wished to met this young boy who was so keen to met him and learn about his experience at Gallipoli.

Posted by Philippa Werry at 21:53 No comments:

The last Anzac by Gordon Winch; illustrated by Harriet Bailey

Synopsis
Alec Campbell enlisted in 1915 when he was only sixteen. He served in Gallipoli but got sick and returned home, a veteran, at the age of seventeen. He died in 2002, aged 103. This is his story, told through the eyes of a young boy called James who went to visit him in the year before Alec died. That’s why this Anzac story starts, unusually, on a plane and then at an airport in Tasmania in 2001.

The endpapers contain facsimiles of wartime letters, postcards and envelopes, including a letter written by Alec (at Gallipoli) to his mother on 5 November 1915.

Reviews:
In Aussie reviews, writer Claire Saxby (Meet the Anzacs) points out that “it’s not easy to share the enormity of a war with young readers” and describes this as “an introduction to WW1 for early primary readers, showing them Gallipoli through the eyes of someone who was there”.

Teachers’ notes include the set of questions drawn up by James and his classmates which he took to ask Alec on Sunday 5 August 2001. Question 16 is What was your greatest moment? and the answer (Eating oranges when we got off Gallipoli) appears in one of my favourite illustrations. Also look out for the beautiful illustration of moonlight over the Aegean – and observant children will pick up on some unspoken details in the spread of the hospital scene.

Questions:
I had a number of questions that I wanted to ask the illustrator, Harriet Bailey and she kindly agreed to answer them. You can read her replies here.

About the author:
Gordon Winch was a teacher for over fifty years and has written a number of books for children.

About the illustrator:
Harriet Bailey is a designer and illustrator based in Wellington, New Zealand. She began her career as a graphic designer. In 2010, she was the inaugural recipient of The Storylines Gavin Bishop Award and since then has illustrated Hester & Lester (Random House, 2011) and Out of Bed, Fred! (Scholastic, 2011). Both books were named in the Storylines Notable Books List 2012 in the picture book category.

You can see other examples of Harriet's art and design work on her website.

Other books you might like:
There are several fictional treatments of boy soldiers, such as My mother's eyes: the story of a boy soldier by Mark Wilson, One boy’s war by Lynn Huggins-Cooper; illustrated by Ian Benfold Haywood and The horses didn’t come home by Pamela Rushby. Charlie and Tommo in Private Peaceful sign up at nearly 16, and the boys in War game are very young as well.

Links
You can find out more about Alec Campbell (nicknamed The Kid by his fellow soldiers, because he was so young and small) here, and here on the Australian War Memorial site, which also has an article about the last veterans from a number of different countries.

Posted by Philippa Werry at 21:53 No comments: