The year it all ended by Kirsty Murray 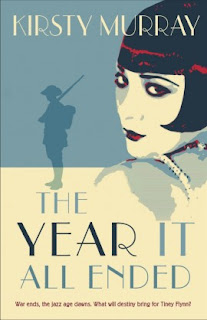 Synopsis
This book starts with a poignant vignette of a pre-war scene, when 11-year-old Tiney – short for Martina - is allowed to join her big brother Louis and older cousin Will on their early morning expedition to Glenelg Beach. Six years later, everything has changed. Louis has gone to war and now the bells are ringing on Tiney’s 17th birthday to signal the armistice on 11 November 1918.

As well as Louis, the family includes Tiney’s three older sisters: Dorothea (or Thea) the artist, Minna and Nette. Their family ancestry is German and Will (or Wilhelm) went to Heidelberg to study and was caught in Germany when the war started. As a result he was conscripted to fight on the German side. Will’s brother Paul, their other cousin, was interned as an enemy alien on Torrens Island.

As the cover suggests, “the year it all ended” was the year that things started to change, and the sub title (“War ends, the Jazz Age dawns. What will destiny bring Tiney Flynn?”) underlines this theme. Although the war is over, its effects continue and there will be many changes in Tiney’s life, both good and bad. Tiney is obsessed with what seems like an impossible dream, to go to Europe, but she manages to achieve it and sails across the world with her friend Ida and Ida’s mother, to visit the battlefields of France and Belgium.

I found this a very interesting viewpoint – not just Tiney’s, but that of a German-Australian family and the attitudes they faced in the war.

Reviews:
I’ve tried to look for reviews that don’t give away too much of the plot, which is tricky as this reviewer acknowledges (but succeeds in doing - or not doing!) The reviewer loved "the vivid way in which Kirsty Murray has bought a period of history to life."

This review does contain more plot descriptions but I’ve included it as it has an author interview, I liked the answers to questions 4 and 6 in particular.

Here is a review from the Kids’ Bookshop (having given up by now on trying to avoid spoilers).

And there are more excerpts from reviews on Kirsty Murray's website here.

About the author:
Kirsty Murray grew up in a family of seven children, in Melbourne and then Canada, has travelled widely, loves reading and says her most important job “and the one that took up most of my time was being a mother”, but has still produced a string of prize winning books. Lots of other info about her on her bio and FAQ pages.

I like her answers to What were your favourite books when you were a kid? and What’s the hardest part of writing for you?

Teachers’ notes are also available on her website here.

Other books you might like:
Remembrance by Theresa Breslin and Flora’s war by Pamela Rushby both tell the story of WW1 from the viewpoint of girls about Tiney's age.

Things I didn’t know
The Cheer Up Society really did exist. “Its object was to support the soldiers in the First and Second World Wars as well as to bring them into contact with the 'highest type of womanhood'. “

You can see some wonderful photos here and here.

Posted by Philippa Werry at 23:53 No comments: 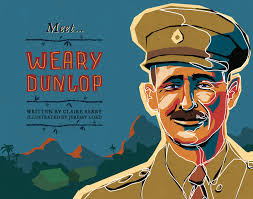 Synopsis
Thanks to Claire Saxby for kindly sending me a copy of her new book. This is one of a series about “the extraordinary men and women who have shaped Australia’s history”. Others in the Meet… series are Ned Kelly, Mary Mackillop, Captain Cook, Douglas Mawson, Nancy Bird Walton and Banjo Patterson (with more titles promised soon).

“Weary” Dunlop (his nickname is explained inside) was an Australian army surgeon in WW2. His bravery, compassion, knowledge and skill helped to save the lives and bolster the spirits of fellow POWs on the Thai-Burma railway.

About the author
Claire Saxby's website is here.
I love her description of her early reading habits: “I have always loved reading. I used to go home from boarding school and read for days on end, only emerging to swim and eat. I love words. I love how they sound, the work they do, the images they create.”

About the illustrator
This is Jeremy Lord’s website, with a page about this book (and some illustrations) here.
He also has an online store (for his prints, often Aussie-themed) where he describes himself as “a French/Aussie, Sydney based illustrator.”

Other books you might like
Meet the Anzacs, also by Claire Saxby, is another book in the same series.

NZ connections
Each year on 25 April, Anzac Day in Thailand is commemorated with a Dawn Service and Gunfire Breakfast at Hellfire Pass and a Memorial Service and Wreath Laying Ceremony at Kanchanaburi Allied War Cemetery.

Things I didn’t know
What did I know about Sir (Ernest) Edward “Weary” Dunlop before reading this? Nothing! (So this book was a good place to start.)

The Australian War Memorial bio says that "On 20 January 1943 he left Singapore for Thailand in charge of "Dunlop Force" to work on the Burma-Thailand railway. He remained there until the war ended, labouring tirelessly to save wounded, sick and malnourished men. Many times he put his own life at risk as he stood up to the brutality of his Japanese captors. Though not the only medical officer to act in this selfless way, his name was to become a legend among Australian prisoners of war and an inspiration for their own survival. Throughout his captivity and at great personal risk Dunlop recorded his experiences in his diaries."

After the war, he got married and continued both working as a surgeon and supporting former POWs of the Japanese. Over 10,000 people came to his state funeral in Melbourne in 1993 and portions of his ashes were later interred at Hellfire Pass and floated down the nearby river.

There is lots of info about him online – more here, including a video clip of the floating of his ashes which is a very moving scene.

Posted by Philippa Werry at 21:08 No comments: