My grandfather’s war by Glyn Harper, illustrated by Jenny Cooper 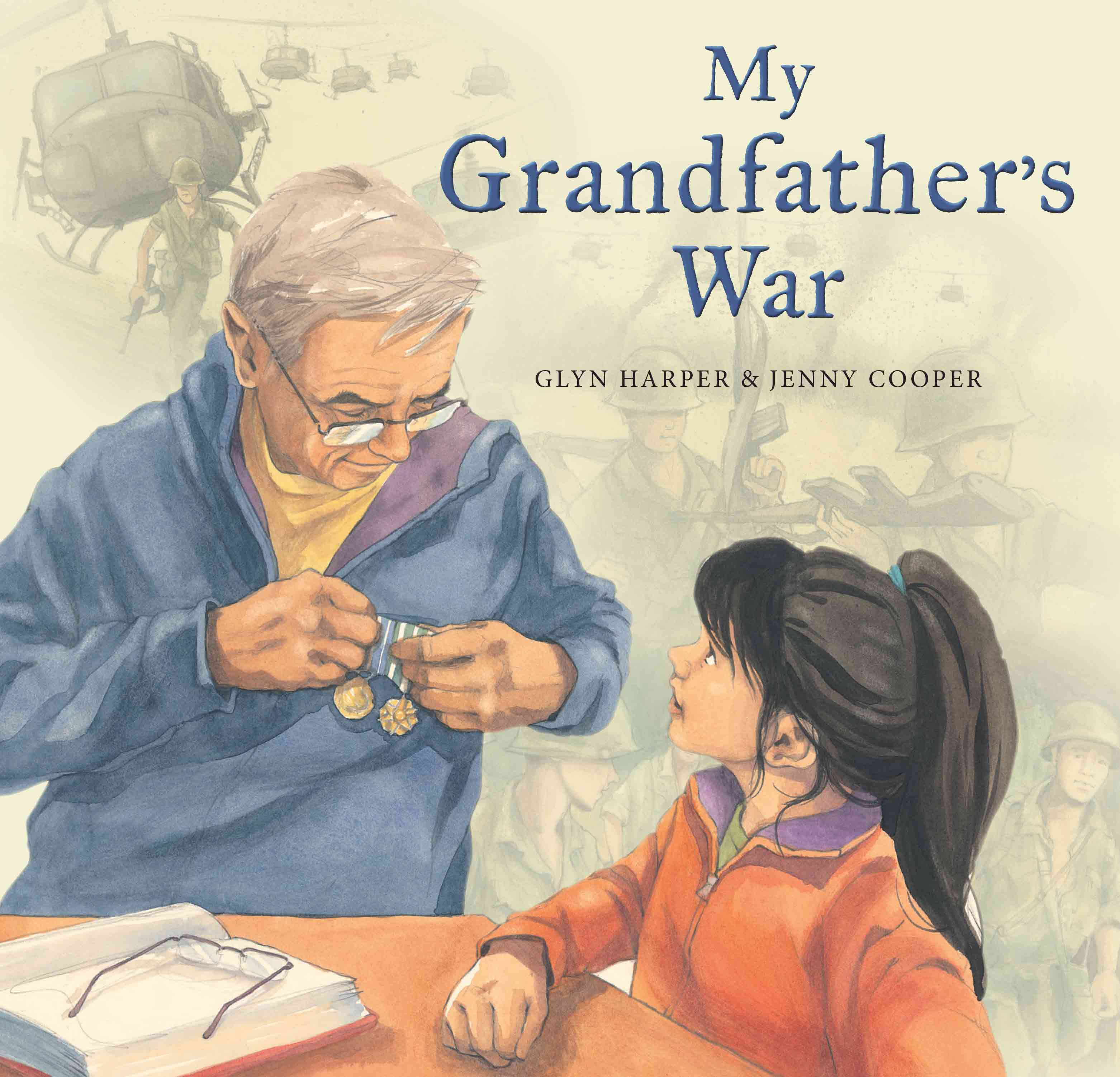 Synopsis
My Grandfather’s War tells the story of 8-year-old Sarah and her grandfather Robert, who lives with her family and looks after her before and after school. The pair have a close relationship and Sarah is sensitive to her grandfather’s occasional spells of sadness. The family doesn’t talk about these, except to tell Sarah that he is thinking about a war in a place called Vietnam.

When Sarah summons up her courage to ask her grandfather why he feels sad, he tells her about his time in Vietnam. The flashbacks of his memory present images of a war which was “not like other wars” and he also tells Sarah about the difficulties the troops faced when they returned home, from anti-war protesters and the after-effects of chemicals.

This is a reworked version of an earlier book, now with the added magic of Glyn Harper’s collaboration with Jenny Cooper, whose illustrations show the warm bond between grandfather and grandchild.


Another thing I really liked about this book is how it models (to both children and adults) how to handle difficult conversations. Sarah is nervous about asking her question but summons up the courage to do so because she loves her grandfather. She tells him that she’s scared and he acknowledges that with a serious, concerned expression (that picture is one of my favourites). Her grandfather doesn’t fob her off and answers carefully but truthfully. The conversation doesn’t make his sadness go away but now Sarah understands it better.

Reviews
Kids book reviews calls it "the perfect mix of narrative and history" and "a gentle educational tool, highly recommended" for classrooms.
Teacher notes are available here and include some thoughtful comments from Jenny about how she approaches the subject of war as an illustrator.

Author’s website
Glyn Harper is Professor of War Studies at Massey University in Palmerston North, New Zealand. He is Massey's Project Manager of the Centenary History of New Zealand and the First World War. A former teacher, he joined the Australian Army in 1988 and after eight years transferred to the New Zealand Army, where he rose to the rank of lieutenant colonel. Glyn was the army's official historian for the deployment to East Timor and is the author of numerous history books. (From the Penguin website)

Info about the illustrator
Jenny Cooper is a wonderful artist who has illustrated more than 70 children’s books. Read more about her on the Book Council site or Christchurch City libraries or Storylines.

Other books you might like
This is the sixth book that Glyn Harper and Jenny Cooper have worked on together. Their previous titles are Roly the Anzac donkey, Jim’s letters, Le Quesnoy: the story of the town New Zealand saved, Gladys goes to war and Bobby the littlest war hero.
There aren’t many books for young readers about Vietnam. Memorial by Gary Crew and Lest we forget by Feana Tu’akoi both touch on it. Other books are Vietnam diary by Mark Wilson and I was only nineteen by John Schumann.
Books about the grandfather-grandchild relationship include Grandad’s medals by Tracy Duncan.

Posted by Philippa Werry at 23:59 No comments:

Very pleased to announce that my Children's war books blog is now included in this list of Top 100 Children’s Book Blogs and Websites for Parents, Teachers and Kids. Lots of other great blogs on there as well.


Posted by Philippa Werry at 19:22 No comments: