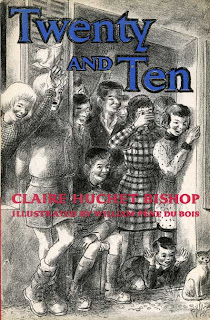 This book was a delightful discovery. I'd never heard of it before finding it on a Storylines list of books about the World Wars.

The story is told by a 13 year old girl called Janet, looking back two years to 1944 when she was one of “twenty” fifth grade French school children. Along with their teacher, Sister Gabriel, they agree to hide the “ten” Jewish children in their boarding school up in the hills. At first the two groups of children don’t get on, partly because they have to share rations so everyone is hungrier.

One day Sister Gabriel walks into town for supplies and doesn’t come back; instead, two Nazi soldiers arrive on bicycles. All the children have to use their wits, courage and ingenuity to protect the ten Jewish children, and a hidden underground cave they find during their games becomes a vital hiding place.

The cave is shown on one version of the cover:

The first chapter might be slightly confusing for any readers who don’t know the Biblical story of Mary, Joseph and baby Jesus fleeing King Herod in the Flight into Egypt. The reason it is there seems to be to draw a parallel with the plight of the Jewish children in the war; also it plays a part towards the end, when it looks like the 4-year-old brother is going to spill the beans.

The story is based on real life events in France during the Nazi occupation. It was adapted for a 1986 movie, "Miracle at Moreau." The book also seems to be available online at various sites.

Teachers’ notes:
There are a number of teaching units online, for example here and here.

Info about the author:
Claire Huchet Bishop (1899 – 1933) grew up in France. In 1924, she opened France's first library for children, L'Heure Joyeuse (The Joyous Hour). She moved to the United States after her marriage. After her first book, a retelling of a Chinese fable  - The five Chinese brothers - she wrote about 30 others, several of which won awards.

Pancakes-Paris (Viking, 1947) was about food scarcity in France after the war. Two American GIs reward a boy called Charles with a box of pancake mix for giving them directions. Charles wants to make crepes for his family, but he's not sure how to follow the instructions because they are written in English.

This short biography includes the tantalising information that she was "active during the Second World War in the cause of European Jews," but doesn't give any further details.

Her obituary in the New York Times also mentions how "the persecution of Jewish friends in France in World War II" prompted her to start writing on different issues.

Who was Janet Joly?
There is an interesting blog posting here about the words “as told by Janet Joly” on the title page.

“Janet Joly” is presumably meant to be the original narrator - the young girl, Janet, who passes on the story to the author - but in fact she doesn't exist. She seems to be part of the story, a fictional character used to make it seem more real. The funny thing is that you can Google her and she comes up on sites like Goodreads as a real author.

Info about the illustrator:
William Pene du Bois (1916-1993) was an American writer and illustrator. He lived with his family in France from the age of 8 to 14, and he also died in France (in Nice.)

Posted by Philippa Werry at 01:03 No comments: 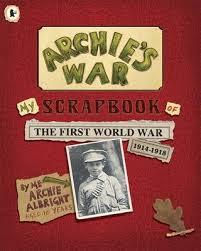 Posted by Philippa Werry at 18:07 No comments: