Synopsis
At the start of the book, John Carey is a Second Lieutenant with the West Glamorgans, who are comfortably ensconced in the regimental barracks at Tidworth. It is August 1914 and war is imminent. There is one last ceremonial regimental dinner, complete with Georgian silver service, toasts and cigars, before the dress clothes are packed away and everyone sets off for war.

Ronald Welch is very good on battle strategy, he understands how and where battles are fought, and he shows how the First World War marked the end of traditional cavalry regiments. You couldn’t use cavalry in trench warfare, because they simply got mown down. He also explains how and why tanks were first used, what they were good for and what they could and couldn’t do.

However, despite the comments quoted later, this book would be unlikely to be read in the same way today as it was when first published.

For a start, there are NO WOMEN in the whole book. Even the medical staff are men. No - actually - there are two women in London who give John a white feather because he is in mufti, but by then he has already been in the trenches and wounded and decorated and it is the tradition for his Battalion to wear mufti on leave, so you get the impression those women are a bit dim because they don't understand anything.

There is little reflection on the awful toll of war, although it’s hard to know if this book was written in 1972 to reflect attitudes prevalent in WW1, or if those attitudes were still prevalent in 1972. (In the Historical note at the back, the author notes that in 1972, the year it was published, “there were still 78,000 men in Britain drawing disability allowances from wounds received in the 1914-18 War.”)

For example, the chapter on Desertion, where Private Tyler is courtmartialled and sentenced to death, shows no sensitivity to his plight (at one stage, John and his senior officer are discussing Gilbert and Sullivan operas); the man is simply treated as a despicable coward. “John stepped back, trying to free himself from the grip of those desperate fingers. He stared with revulsion and horror at that moaning, scrabbling figure on the floor at his feet.” (Compare that with Private Peaceful or David Hill's My brother’s war.)

Some of the comments below compare Ronald Welch to Rosemary Sutcliffe, and I did enjoy her books as a child. It will be interesting to see how they fare on re-reading, and if her books are equally weighted in favour of male characters.

Author’s website
Ronald Welch (1909-1982) was writing well before the days of authors’ websites, and it wasn’t even his real name. He was born Ronald Oliver Fenton, in Wales, to English parents. He was a well-known author of children’s historical fiction, as well as being a history teacher and later headmaster. During World War Two, he fought in the Welch Regiment, and that was what he took his pen name from.

In 1955, he won the Carnegie Medal for the most outstanding children’s book of 1954 with Knight Crusader, which was the first in the Carey Family series. There are 12 books altogether, covering wars from the 12th to the 20th century, although they weren’t written in chronological order. Tank commander is the final title in the series (it has a Family Tree at the beginning), but not the last one to be published.

Bear Alley is a blog run by a freelance author and editor with a special interest in old British comics, books and magazines. Here he talks about Ronald Welch and his books,and his piece is followed by a string of enthusiastic comments from readers:
With only a few dissenters:
And according to a note on the end of this post on the Historical Writers' Association, Slightly Foxed is republishing all 12 of Ronald Welch’s Carey Novels, starting with Knight Crusader, The Galleon and For The King in September 2013, with subsequent titles to follow throughout 2014-2016.


Info about the illustrator
Victor G. Ambrus (1935- ) was born in Budapest and is still alive – with a website! I’m not sure why I was so surprised, except that this book does have such an old-fashioned feel.

Here is an example of his illustrating style (from his website):


Things I didn’t know:
I didn't know anything about how tanks were developed or when they were first used.

Here's another article about them with some more fascinating pictures.

“Anzac” was of course a new word that emerged in World War One, but Ronald Welch notes others, such as “camouflage”, which comes from the French word camoufler, to disguise, and is recorded as having its first known use in 1917.
I went looking for other examples and found a post on language of the First World War. There was “camouflage” again:
“Many words which emerged at the time have clear associations with the conflict, such as camouflage, blimp, aerobatics, demob and shell shock.”
If you’re interested, you could also follow up the derivation of other war words such as Blighty, cushy or strafe.

I knew that officers in the British Army traditionally came from the upper classes. It was a well-recognised career path for a younger son.
However I didn’t realise that this was made inevitable by low rates of pay. According to Ronald Welch, “the pay of a Second Lieutenant was 5/3 per day and his Mess Bill 7/6 without any drinks at all. Not even Senior Officers could live on their pay and a private income was essential. A thousand a year in some regiments, six hundred at least in many more, and not far short of four hundred the absolute minimum. John knew of several officers in the room who were heavily in debt, and to them the coming war, if they survived it, would be an enormous relief.”

I didn't know that the Battle of Waterloo, fought in 1814 between the English and the French (think Vanity Fair), took place close by some of the battles fought in World War One.

John Carey’s first experience of war is at Mons, in Belgium. “For the first time in ninety-nine years the British army was fighting again in western Europe…  It was quite possible, John thought, remembering his Military History, that some of those men falling as British bullets hit them were grandsons of the Prussian soldiers who had made a forced march ninety-nine years ago on another Sunday, not so very far to the north of Mons, so that they could fight with their British allies, already fiercely engaged in battle at a place called Waterloo.”
That means that 2015 is also the bicentenary of that battle - which is a complete diversion, but still interesting.

In Flanders fields by Norman Jorgensen, illustrated by Brian Harrison-Lever 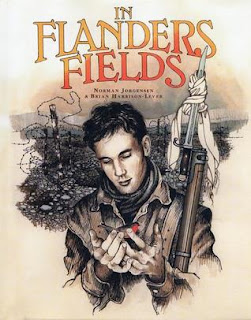 Synopsis:
The summary in the teaching notes is clear and succinct:

“In Flanders’ Fields, set in the trenches of World War I, tells the story of a young, homesick Anzac soldier who, on Christmas morning, faces almost certain death in a seemingly hopeless attempt to rescue a robin caught in the wire of no man’s land. Although the story takes place in the midst of a long and brutal war, the fighting has paused and no violence is seen. The focus of the book is on the similarity of the soldiers on both sides of the fence and the absolute futility of war.”

As the summary says, the book is unusual in focusing on soldiers on both sides of the trenches. The German soldiers begin to sing a carol – “Stille nacht” - and the Allied soldiers continue it in English – “all is calm, all is bright.”

As with all good picture books, the text (sparse, simple) and pictures (in their muted tones) complement each other beautifully. I was struck by the image of the barbed wire which occurs on many pages and suggests the barbarity of war, as well as the way these young men were trapped in it with no way out.

The final page shows a scene of a graveyard crowded with crosses and poppies, and features a verse from John McCrae’s famous poem In Flanders Fields.

Dedication:
Both author and illustrator have dedicated the book to soldiers, presumably relatives, who served in the First World War. Some survived, some were wounded and some died.

Reviews:
There is a short review on the Fremantle Press site.

A review in The Age (“Oh what a lovely war”) includes an interview with both author and illustrator ("A book for children about World War I has won the best picture- book award.")

The Children's Book Council of Australia lists it under Picture book of the year:
"The story is told with slow solemnity and sensitivity that is never allowed to sink into sentimentality. In World War I on Christmas Eve, a young Australian soldier walks out into no-man’s-land to free a small robin caught in the barbed wire. The robin symbolises the survival of compassion and hope. The text is sparse and compelling, using the present tense. Subtle use of black and sepia pen and wash capture the bleakness of battlefield, sandbags and barbed wire, contrasting starkly with the sacrificial red of the robin’s breast and the Flanders poppies. The endpapers, tableaux of soldiers in opposing trenches, have a pathos which encapsulates the wasted humanity of war."

A white silk scarf was sent to the soldier. What does that tell you about the ideas that people at home held of the conditions in the trenches? What Christmas gift would you send a soldier?

The main character in the story remains anonymous. Why do you think the author didn't give him a name?

Author’s website
Norman Jorgensen is an Australian writer, born in Broome. He says the book was partly inspired by “a single scene in an old black and white silent film…the first version of Erich Remarque’s All Quiet on the Western Front made by Lewis Milestone in 1929” - the image "where the German hero reaches for a butterfly and is shot by a sniper."

About the illustrator
Brian Harrison-Lever used his 19-year-old son as the model for the soldier, who looks very young and fresh-faced in his illustrations. The teaching notes include some lovely details about the process of illustration, something you don’t often read about:
“I initially decided to limit my palette to Sepia, Pane’s Grey, and diluted black ink, with the robin’s red chest feathers being the only bright colour through the book. As the work progressed a touch of watery Vermilion and Cadmium Yellow was included in the fire tins as a concession to Christmas for the poor homesick youngsters. As morning breaks and the daylight strengthens I added a little Cerulean Blue to the sky and the morning light.”

Other books you might like:
War game by Michael Foreman tells the story of a football game played between opposing sides during a temporary truce. Look at my blog posting on that book for more details about Christmas and other truces that took place during the First World War.

Links
I'd never heard of the In Flanders Field Museum in Belgium before, but the website looks really interesting and it includes the full text of the poem.

“The In Flanders Fields Museum presents the story of the First World War in the West Flanders front region. It is located in the renovated Cloth Halls of Ypres, an important symbol of wartime hardship and later recovery.”