Le Quesnoy: the story of the town New Zealand saved by Glyn Harper 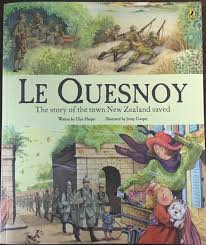 Synopsis:
Le Quesnoy is a historic town in northern France, surrounded by walls and moats. This book tells how New Zealand forces liberated it in November 1918, right at the end of the First World War, from the Germans who had held it for the past four years – and how they managed to do that, with bravery and ingenuity, so as not to destroy or damage the town itself.

The story is told through the eyes of a small girl living in the town, who makes sure to tell us at the beginning how to pronounce its name: Ler kay nwah.

Jenny Cooper’s warm and beautiful watercolours catch the feel of the French town, complete with bicycles and baguettes, hats and berets, shuttered windows and French flags. I like the careful way she has shown us that only the women, children and old people are left behind, once the young men have gone off to war, and how they look hungrier and thinner as the war goes on.

There is a map of the town on the endpapers, and a page of factual information on The liberation of Le Quesnoy at the back. “The latest research indicates that 130 New Zealanders were killed and another 300 were wounded in the military action that captured the town.”

About the author:
(From the Penguin website):
“Glyn Harper is Professor of War Studies at Massey University in Palmerston North, New Zealand. He is now General Editor of the Centenary History of New Zealand and the First World War. A former teacher, he joined the Australian Army in 1988 and after eight years transferred to the New Zealand Army, where he rose to the rank of lieutenant colonel. Glyn was the army's official historian for the deployment to East Timor and is the author of eighteen books …[including] his most recent Letters from Gallipoli: New Zealand Soldiers Write Home. Le Quesnoy is his seventh children's book.”
Some of the others include The donkey man (Reed, 2004) and My grandfather’s war (Penguin, 2007).

About the illustrator:
This is Jenny Cooper's page on the New Zealand Book Council site.

NZ connections:
This has become one of the most famous stories in New Zealand military history and the relationship between Le Quesnoy and New Zealand continues to this day. You can read more about it on pg 40 of Anzac Day: the New Zealand story.


Today, Le Quesnoy even has street names with a kiwi theme (e.g. Place des All Blacks) and is twinned with Cambridge, here in the Waikato. 
Links:
Welcome to Le Quesnoy: useful information for visiting the town.
Information on Le Quesnoy from the New Zealand Embassy in Paris.
The friendship association between the towns of Cambridge and Le Quesnoy.