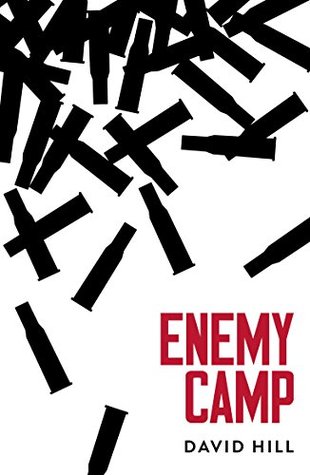 Synopsis
“When of hundreds of Japanese captives arrive at Featherston POW camp, the tiny town is divided. Tensions run high and then, on 25 February 1943, disaster strikes. Three boys witness it all.” (Publisher’s blurb)

Ewen lives in the small town of Featherson, where his father works as a guard at the POW camp. His diary covers the months between October 1942 and February 1943 and describes everyday life in wartime, school, the summer holidays, the attitudes of local people to the Japanese and the gradually increasing tension between some of the prisoners and guards. Together with his best friend Barry and Barry’s younger (polio-affected) brother Clarry, Ewen starts taking Japanese lessons from one of the officers, and this provides a great way to show a positive side of Japanese life and culture that many of the townsfolk have no idea of.

David Hill skilfully builds in many other aspects of 1940s life: the ever-present fear of polio, food shortages, barbed wire on the beaches, the blackout, the Home Guard, American GIs handing out sticks of gum, practice air raids, school milk, ink wells, picnics, the movies and dances. He has a wonderful way of capturing a 12-year-old boy’s voice, in Ewen’s remarks on the progress of the war (“So yeah, we’re going to win”) as well as the progress of his friendship with “snobby Susan Proctor” (“And – I’m still trying to believe this – I spent most of the time talking to Susan Proctor”).

It’s also a refreshing change to read about a boy who reads and likes writing, and wants to be an author when he grows up, and about a warm and close, even if undemonstrative, father-son relationship.

Reviews:
Bobs book blog says: "Superbly written in short diary entries that primary and intermediate students can easily read, coupled with David Hill’s easy style and you have great historical fiction. The account of the event itself with the boys looking on is sensitively done. A very readable novel."
Another review by Siobhan Harvey calls it "both an enjoyable read and an imperceptible history lesson" and notes that "importantly, Hill personalises the demonised foe, allowing young readers to see Japanese captives as much victims of war as anyone fighting on the Allied side."

About the author
David Hill is one of NZ’s best loved authors for young people. Here is an article in which he talks about the book:
"I'm not preaching any themes. I want them to have a story first. I hope they like the people, especially Ewen the young protagonist. If they see attitudes that they agree with and some they disagree with I'll be very happy with that."
There's another interview here on Radio NZ. I also enjoyed this interview and David Hill's comments about writing about war ("War is wonderful to write about because it involves conflict - physical, mental and internal") and why he likes writing for and about this age group ("because they're coming across ideas and experiences for the first time. They're surprisingly sophisticated, they have a good vocabulary and understand a lot. They're a lovely mixture between naivety and sophistication.")

Links
You can read more about the “Featherston incident" here.
And if you are ever driving on SH 2 between Featherston and Greytown, look out for the roadside memorial to the POW site.