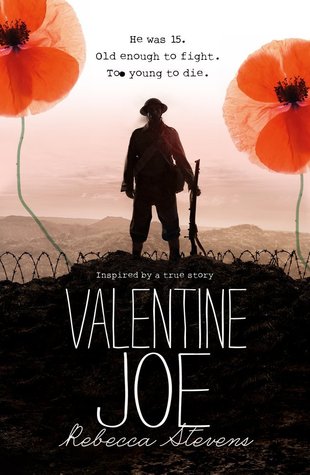 Synopsis
Rose’s father died a year ago and she still misses him so much that she secretly sends him texts on her phone. Her grandad takes her along on a trip to visit his uncle’s grave in Ypres, and in the cemetery she comes across the grave of a young soldier who died just before his sixteenth birthday. A stray dog leads her into a time slip adventure where she goes back in time to World War One and meets the soldier, 15-year-old Valentine Joe. As well as being an adventure, this also turns into a way of Rose coming to terms with her father’s death.

The best part of this book for me was the relationship between Rose and her grandad, which is teasing, funny and affectionate, as shown by their nicknames for each other. I found parts of the story slightly disjointed, which reflects the fact that Rose keeps getting thrown back into different times. She is often unsure where or when she is, or what is happening, which made it a bit confusing for the reader too.

Rose is 14 (and not a very sophisticated 14), and for the sake of the plot, she has to go off on her own at night, but I wasn’t sure if her grandad would really have let her wander round the streets of a strange town in the dark, no matter how safe the hotel keeper assured them it was.

This would appeal to readers who like time travel and a touch of romance as well as a war story. I wonder if it would also appeal more to British children who are more likely to go on school trips to visit the graves.

Reviews:
The first chapter is online on the Guardian children’s books site, which also has a review (“It’s only a slim volume, but in its 150 pages Rebecca Stevens manages to weave a perfect war story: gripping, heartbreaking, realistic, witty and full of hope.”)

The Bookbag also refers to its length and calls it “small in terms of number of pages”, but “decidedly big in terms of themes and emotional weight” with "one of my favourite endings of the year".

Author’s website
Rebecca Stevens has been an actor, a standup comedian and a script writer for children’s television, writing for shows like Mr Bean and Postman Pat. This is described as “her first solo book project.”
You can see Rebecca Stevens here reading from Valentine Joe.

And here on the BookTrust website ("telling the story of the short life of a real person"), she writes an interesting piece on using someone else’s story, or someone else’s life as the basis for your book:

Did I have the right to use Joe and the events of his tragically short life for the purposes of my book? I don't know... Although I managed to contact one of his relatives who gave me her blessing (and I've subsequently met another), it still felt wrong, disrespectful somehow, to put myself in his shoes, imagine his experiences from his point of view. So I decided to tell his story through the eyes of a character who was entirely invented, someone I felt closer to. Rose is a 14 year old girl from the present day, who goes to Ypres with her granddad.”

She also talks about her own grandfather who signed up when he was 16, but was sent home when a doctor suspected his real age. (He signed up again at 18 but survived the war.)

Other books you might like:
The topic of boy soldiers is a popular one. Charlie and Tommo in Private Peaceful sign up at nearly 16, so does William in My mother’s eyes: the story of a boy soldier, Sydney in One boy’s war and Harry and Jack in The horses didn’t come home. The boys in War game are very young as well.

“Boy soldiers” by Norman Bilbrough in School Journal, Part 4, No 3, 2008 tells the story of two young soldiers, Stan Stanfield and Len Coley, who fought in World War One.

The red suitcase by Jill Harris and Charlotte sometimes by Penelope Farmer are war-related time travel stories. When the guns fall silent by James Riordan also uses the device of a child visiting the war graves with a grandfather.

Links
Private Valentine Joe Strudwick was a real soldier. He was born in Dorking, Surrey, and you can read more about him here on the website of the Dorking Museum.