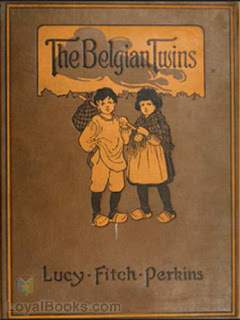 Synopsis
This is quite exciting as I’ve been wanting to read some older books, which can be hard to access in print, but I’ve just realised that they are accessible online, for example on Project Gutenburg. This title even seems to be on youtube as an audiobook.

Jan and Marie are twins (as we know from the title), 8 years old, living on a farm in Belgium. It’s summer, harvest time; everything is peaceful and idyllic. There are rumours of a German army at the borders, but Belgium is neutral and surely she will be protected.

The men of the village are called away to join the army and it is hard for the women and children to know what is happening. (“There were no daily papers in Meer, and now there were no young men to go to the city and bring back the gossip of the day, as there had used to be.”) Then news comes that the Germans have crossed the eastern border and want to cross into France. That night their mother fastens a locket around Marie’s neck, and tells her, “You must wear it always… and remember that your mother's name is Leonie Van Hove, and your father's name is Georges Van Hove. If by any chance—which God forbid—we should become separated from one another, keep the locket on your neck, and our names in your memory until we meet again; for if such a thing should happen, do not doubt that I should find you, though I had to swim the sea to do it!"

When the “great tidal wave” of “a long gray line of soldiers on horseback” approaches the village, their mother hides the twins and the dog in the vegetable cellar. When they venture out again, the house has been ransacked for food and their mother has disappeared. In fact “there was not a human being but themselves in the entire village; all the others had been driven away like sheep, before the invading army.”

The children are brave and appealing and never lose faith that their mother will find them. The dialogue is realistic and often funny - here are a few examples:

Marie and Jan go in search of their mother and join a flood of refugees on the road to Antwerp and safety in Holland. On the way they are taken in by an old woman, then a family on board a barge who take care of them and protect them from noticing too much of what is happening (burning houses and villages) but they can’t help seeing all the German soldiers.  Just in time they escape the siege and bombing of Antwerp and reach Rotterdam where they are placed in the care of the British Consul and put on a boat going to England, then taken to a large country house set aside for homeless Belgians.

“At night they and the other homeless children slept in little white cots set all in a row in a great picture gallery… Every day more Belgians came, and still more, until not only the big house, but the stable and outbuildings were all running-over full of homeless people.”

The next stage of their journey is by sea to New York to live with a childless Belgian couple who have offered to look after them. “They had chicken for supper, and, after that, ice cream! Jan and Marie had never tasted ice cream before in their whole lives! They thought they should like America very much.”

The last chapter is called THE MOST WONDERFUL PART, so you can guess it has a happy ending. It does seem coincidental, but the Preface says that “this story of two little Belgian refugees is based upon the actual experience of two Belgian children, and the incident of the locket is quite true." I tried to find proof of this, and couldn't - it would be fascinating to know the background to the sorry.

Reviews:
You can read a short, but very early, review of this book in the New York Times for December 9, 1917.

Booksylvania posts reviews by 11-year-old Lucy: "This book is inspired by the actual events in Belgium, of two Belgian children. I loved this book because of the truth in it."

About the author
Lucy Fitch Perkins (1865-1937), American author, educator and illustrator, wrote the popular Twins series of books. Born in Maples, Indiana, she studied at the Fine Arts School in Boston, then worked as a book illustrator with the an educational company and taught at art school. In August 1891, she married Dwight Perkins, an architect and teacher. Her first book (The Dutch Twins) was published when she was 48, and she kept writing one or two books a year from then on, wanting to give children "a correct idea of life in other countries" and to encourage "a spirit of friendliness and good will for children of other nationalities."

You can find a list of all her twins books here. What is quite astonishing is that this book was published while the war was still going, so that (as the Suggestions to teachers says) “American children who have been giving their pennies to help take care of little Belgian children will find this new "Twins" book one of the most appealing that Mrs. Perkins has ever written.” The French twins (1918) was also written in war time.

Things I didn't know
I didn't know anything about Belgian refugees in England and recently came across this article about the thousands who fled across the Channel when the Germans invaded. Many of them settled in a refugee community in Elisabethville, near Durham. Both of these articles feature some fascinating facts and photographs.