The little ships by Louise Borden

Some covers have the subtitle: The heroic rescue at Dunkirk in World War II 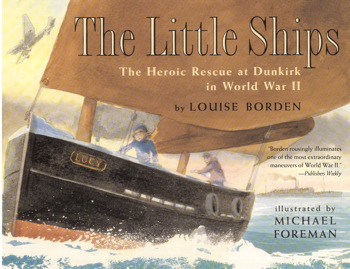 Synopsis
In May 1940, the unnamed narrator lives with her father, a fisherman, in the town of Deal on the Kent Coast.  She is a girl, but “fisherman on the beach said I was my father’s daughter.” Her brother John is away fighting in France.  When word comes that half a million British and French soldiers are trapped on the beaches of Dunkirk, she disguises herself as a boy in some of her brother’s old clothes and joins her father (in his fishing boat the Lucy) and an armada of "little ships" that sets sail across the English Channel to rescue them.
I didn’t know that people from English villages and towns actually signed up to go and help, as shown in one of the illustrations. And I didn’t know that soldiers brought back their pet dogs (and some strays) with them – over 200 dogs were aboard ships landing in Dover!
There is a map in the front, and a historical note and excerpt from Winston Churchill’s famous speech (“we shall fight on the beaches…”) at the end. Some of the pages have a lot of writing on them, and I would think that the text is longer than that of an average picture book. There are a lot of illustrations of boats and ships, which I guess is understandable!
Reviews:
Kirkus reviews (always a prestigious place to get a review) calls this "A moving, fictionalized account of the ``miracle of Dunkirk,'' in which an armada of 861 ships ferried to safety across the English Channel over 300,000 Allied soldiers who had been trapped in northern France by the Germans."

The Children's War blog says it is "an excellent book for introducing the topic of Dunkirk to younger kids but is also a good teaching tool for older kids who may already know something about World War II."

Author’s website
Louise Borden is an American writer from Cincinnati.  I’d never heard of her before reading this book, but now I’m hoping to read more of her work. Her website has a very readable section about Becoming a writer (under the About button). I like how she talks about riding home on her bicycle as a child: “Pedaling slowly up my street may be where I learned perseverance, something all writers need when they are working alone at their desks.”

And I love what she says about writers needing to have thinking time. It’s a long quotation but it makes so much sense to me:
“Often I am in my car, driving to new places to meet new people, and to talk about writing. I have a lot of thinking time on those miles. And I have a lot of thinking time when I am working in my garden at home. Thinking time: It's so very essential for a writer. I think about new ideas for books, and new ways to write them. I think about what is important to me, and the new things that I want to learn. I think about the books I read as a child—and the books I am reading today.
I think about my family who are my great encouragers. And my wonderful editors who understand, in just the right way, my creative vision for a picture book. These thoughts always inspire me to return to my desk and begin working on a rough draft for a new manuscript.”

Info about the illustrator
You can read more about Michael Foreman on my review of his book War game.

Other books you might like:
The snow goose and The dolphin crossing, both already reviewed on this blog, are other books about Dunkirk. The evacuation of Dunkirk has a resonance for England that is perhaps a bit like Gallipoli for us in New Zealand: a defeat, but a heroic failure.

Things I didn’t know
Louise Borden’s website has pictures of her research trip for writing this book. She took part in one of the Crossings of the Association of Dunkirk’s Little Ships (as referred to in the Foreword), which is “the surviving remnants of the intrepid band of assorted boats and yachts that contributed so much to the miracle of Dunkirk.”
I didn't know there was an Association of Dunkirk's Little Ships! There  is some fascinating info about it on their website, including an answer to the question “how do I identify if my boat took part in the Dunkirk evacuations?”

The Association returned to Dunkirk in May 2015 to commemorate the 75th anniversary of Operation Dynamo, with 50 Little Ships escorted by the RNLI and the Royal Navy. There are some great photos and descriptions in this newspaper report from the Telegraph.

Have you read this book? Let me know what you think!
Posted by Philippa Werry at 17:00