My brother’s keeper by Tom and Tony Bradman

11 chapters; 111 pages including a few pages of historical notes

Subjects: World War One, France, deserters, boy soldiers, junior fiction (Year 5-8? but shelved in the YA section at library so maybe meant for older but less proficient readers.) 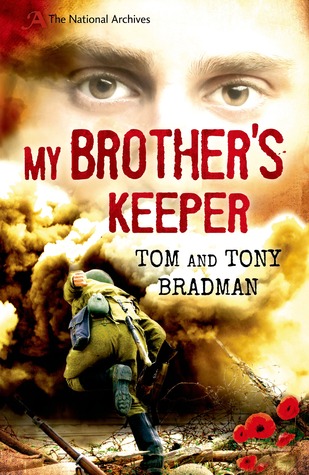 Synopsis
Set in Flanders in 1915, this is the story of young Alfie Barnes. We suspect he is very young right from the opening sentence, when he stands on the fire-step of the trench and “wished he were taller”. He’s been working in Covent Garden markets since he left school at 12, but still looks young for his actual age of 15. When he signs up, claiming to be 19, the sergeant at the recruiting centre grins and says, “I suppose I’ll have to take your word for it.”

In the trenches, his older mates Ernie, Cyril and George look after him. They’ve been in action long enough to learn to keep their heads down, but Alfie is naively excited, hoping to have a go at “the Hun” and yearning for action. When it comes, of course, it’s not what he expects.

There’s not much to tell Ernie, Cyril and George apart, and I wasn’t convinced that a 15-year-old in the army would have spoken up as Alfie did. But there are good, clear descriptions of exactly what life in the trenches was like: how the men boiled their kettles, for example, what they ate and what they wore.

This is not a long story and there are other books that explore these issues more deeply. Perhaps it might serve as a good easy-to-read introduction to the topic. Our local library shelved it in the young adult section, so maybe it is meant for older but less confident readers.

You can read an extract from Chapter One here.

Author’s website
Tony Bradman writes poetry and fiction for children, including the Dilly the Dinosaur and Swoppers series. He now writes in partnership with his son, Tom Bradman.

Other books you might like:
Other books that I've reviewed about boy soldiers include Valentine Joe by Rebecca Stevens, The last Anzac by Gordon Winch, illustrated by Harriet Bailey, One boy’s war by Lynn Huggins-Cooper, illustrated by Ian Benfold Haywood and My mother's eyes: the story of a boy soldier by Mark Wilson.

Things I didn’t know
Every book, no matter how short, can often tell you something you didn’t know about WW1. I learnt from this one that soldiers didn’t have to salute the officers in the front line (but they did if they were sent with a message to HQ.) And I learnt about applying camouflage before a night raid: how they mixed a black powder (burnt cork) with wet mud from the walls of the dugout and smeared the resulting thick paste over their faces.