Synopsis:
This book is based on the true story of Caesar, which was told to the author, Patricia Stroud, by her mother, Ida.

Ida (aged four) was in the crowd when Caesar the bulldog, as official mascot, led the Rifle Brigade down Queen St in Auckland to board the ships that would take them to Egypt and the Western Front. As described in the book, Ida donated her blue ribbon for Caesar to wear. She gave it to her uncle Tom who was Caesar’s handler and he tied it onto Caesar’s collar.

Caesar worked during the Battle of the Somme in 1916 as a Red Cross dog. These dogs helped the stretcher-bearers to rescue wounded soldiers at night from No man’s land, the area in-between the trenches of the two opposing sides. They were trained to look for something that belonged to the man, such as a coat or cap, bring that item back to the stretcher bearers and then lead them to the wounded soldier.

Caesar was shot and killed in action. His handler, Tom, was temporarily blinded by mustard gas and sent to hospital in England. He married one of the nurses and they returned home on a hospital ship.

The family history aspect of the story is underlined by the way it is told to three boys, James, Brendon and Michael, who are visiting their great-grandmother (Ida) in the summer holidays. She tells them about the parade, and how her other uncles also went off to war.

The book was reprinted in 2009, with extra content, as Caesar: The True Story of a Canine ANZAC Hero ("A recount of the life of the bulldog that became the official mascot of the 4th Battalion of the NZ Rifle Brigade"). About the author
According to the Harper Collins website: “Patricia Stroud is a mother and grandmother, who has researched the facts behind a much loved family story to record a little-known aspect of New Zealand’s military history. As a volunteer, she spends many hours interviewing war veterans and recording their stories for the oral history archives of her local museum. Patricia and her mother Ida both live in Auckland.”

There is an interview with Patricia in the New Zealand herald, and here she is visiting the children of Botany Downs school.

About the illustrator
Bruce Potter (here is his Storylines profile) has illustrated many other books, including The Donkey Man by Glyn Harper, Grandad's Medals by Tracy Duncan, Soldier in the Yellow socks by Janice Marriott and My Grandfather's War by Glyn Harper. (And who knew he is also "an internationally ranked powerlifter"??)

Other books you might like
The Anzac puppy by Peter Millett and Trish Bowles is an appealing picture book based on the true story of a World War One mascot. The red poppy by David Hill, illustrated by Fifi Colston, tells the story of Nipper the messenger dog.

Links
This unusual vintage clip shows a French Bulldog working on the Western Front in France in 1917.

The article about Caesar on the NZ History website includes this photograph of his collar (with an incorrect spelling of his name), now held at the Auckland War Memorial Museum (where you can also buy a soft toy Caesar!). 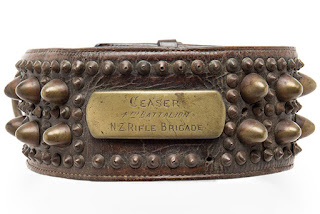 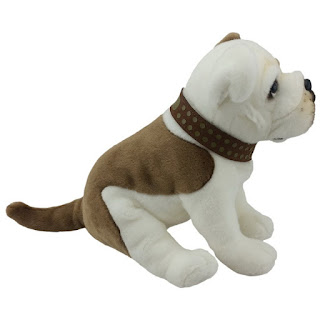