The Flambards trilogy by K.M. Peyton

The Flambards trilogy by K.M. Peyton (Flambards, The edge of the cloud, Flambards in summer) (Penguin, 1980)

Flambards was first published in 1967 and the sequels in 1969; the trilogy runs to just over 500 pages 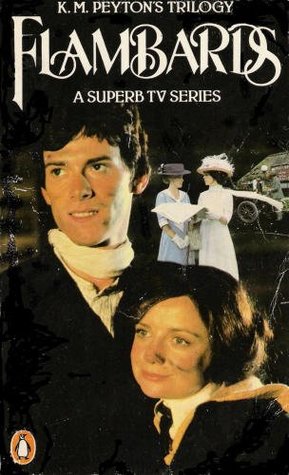 Synopsis
Winner of the 1970 Guardian award, and later made into a film, the Flambards trilogy captures a fascinating slice of history, not just the history of WW1 which is largely peripheral to the main action – mostly shown by men signing up and leaving, returning or failing to return from the front - but also the history of social attitudes, especially concerning women and the class system. Reading it makes you realise how often books about WW1 start in the middle of the war, or at the very beginning, but seldom before it.

The three parts of the first book, Flambards, are set in 1908, 1910 and 1912. With the benefit of hindsight we know that war is looming, and some of the characters suspect that something bad is coming, but the story stays focused on Christina Parsons, 12 years old when the book opens, an orphan but an heiress, due to come into a fortune at 21.

Having spent her childhood moving from household to household, Christina is summoned by her Uncle Russell to join him and his two sons, Mark and William, at Flambards, a crumbling estate famous for having the best stables in the county, where the year revolves around the hunting season (the opening sentence is: “The fox was running easily”) and far more care and attention is lavished on the horses than on the house. Uncle Russell, crippled after a hunting accident, angry, frustrated and bullying, rules the house from the study and despises his younger son, Will, who hates hunting so much that he goes to terrible lengths to ensure he will never have to hunt again.

Christina, self-possessed and used to looking after herself from an early age, copes with her new strange surroundings but she is convinced that “they’re all mad”. Everything changes for her when her uncle insists she learns to ride (under the careful tutelage of Dick, the stable boy) and she discovers how much she loves it; like her mother before her, she is “a hunting Russell”. With Mark, she goes out riding and hunting all through the hunting season and returns to talk over each day’s events with Russell over dinner, while Will sits by, mute.

In the two-year jumps between each part of this book, Christina, Mark, Will and Dick all get older and there are more changes. Will, a gifted mathematician, is besotted with the new flying machines. Dick is given his notice, a dreadful thing to happen in the days before social security when poverty and the workhouse posed real threats and families could easily fall through the cracks and disappear. Christina, growing up in a house without women apart from the cook and maid, and ignorant of matters that today’s children would understand at a much younger age, is often at a loss in situations where nobody will explain the truth or meaning to her. She doesn’t understand Will’s views on the inequality between their lives and those of the servants, and thinks it impossible for a servant girl to become pregnant before marriage, but she is brave and resilient, determined, sensible and loyal, with a warm and loving heart.

The second book, The edge of the cloud, leaves Flambards behind and explores the world of the young flying enthusiasts. Flambards in summer takes us back again, with a grown-up (21-year-old) Christina, to a world that has changed in so many ways because of the war.

I enjoyed the first two books more than the third, because – without revealing too much of later plot (or romantic) developments – the third one has more of an elegiac and introspective tone, overshadowed by death, loss and grief, without any of the excitement of flying, and also the character of the child Tizzy didn’t really work for me. But the three together give a powerful impression of how people’s lives changed so utterly in that decade from 1908 to 1918.

Here is Christina, watching a sunset in the peace of the countryside:
“It made her more bitter, this peace, that while she was standing looking at everything that was the essence of the sentimental picture of home, which all the newspapers made out that the  ‘boys over there’ were fighting for, the fact that the boys over there were now dead and would never come home again made completely negative the sweetness of every flower and the balm of every sunset.”

Reviews
These books with their long descriptive passages show the differences in writing for young people that have evolved over the last 40 years. On the other hand, I can remember skipping those long passages as a child reader. Did every child do that?
About the author
The bio at the front of the book says that K.M. Peyton was born in 1929, studied painting at Manchester Art School, lives in a village in Essex and enjoys sailing, riding and long distance walks.

Other books you might like
There are a number of book about horses in war, especially the Australian and NZ horses that travelled to Egypt, as well as Michael Morpurgo’s famous War horse. Elizabeth Wein's Rose under fire tells the story of a WW2 female pilot, but I haven't found many books that tell the stories of the early pilots (Biggles learns to fly is one.) The Flambards trilogy captures these heady days when flying was still new and largely untested, when aircraft were fragile and their design still a matter of experimentation, as were techniques like looping the loop, but accidents were common and often fatal. Some adventurous people paid to go up for a ride, others turned up in droves to watch competitions, but many ridiculed the new machines and doubted that they would ever replaces the horse and carriage.