3 parts; 198 pages with a few full-page black and white illustrations 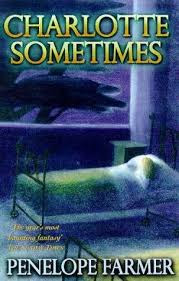 Synopsis
This was one of my favourite books as a child, although I realise now that I read it as a time travel fantasy, with very little understanding of the historical background.

The New York Review has a succinct summary of the plot:
It’s natural to feel a little out of place when you’re the new girl, but when Charlotte Makepeace wakes up after her first night at boarding school, she’s baffled: everyone thinks she’s a girl called Clare Mobley, and even more shockingly, it seems she has traveled forty years back in time to 1918. In the months to follow, Charlotte wakes alternately in her own time and in Clare’s. And instead of having only one new set of rules to learn, she also has to contend with the unprecedented strangeness of being an entirely new person in an era she knows nothing about. Her teachers think she’s slow, the other girls find her odd, and, as she spends more and more time in 1918, Charlotte starts to wonder if she remembers how to be Charlotte at all. If she doesn’t figure out some way to get back to the world she knows before the end of the term, she might never have another chance.

On her blog, Penelope Farmer writes an interesting summary herself, describing the book as being “set in the kind of English boarding school my twin sister and I attended/were incarcerated in – take your pick – for part of the fifties.” No wonder the school scenes ring so true. The girls have very English names: Susannah, Vanessa, Janet, Elizabeth, Sarah, and there is a mystery about Sarah’s unexpected kindness to Charlotte, explained at the end. 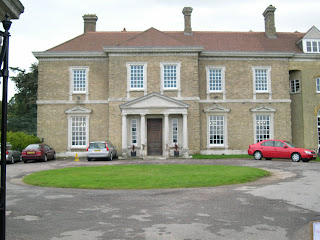 (This is the school which Penelope and her sister went to, and which she used as the setting for the book, including the cedar tree and the glassed-over verandah that Charlotte climbs out onto.)

She adds that “the whole book turned – though I didn’t see that when I wrote it – on identity; how do people identify you as you?” and says this is “a particularly relevant question for twins in general, and still more so for two not identical but similar looking twins like my sister and me, quite different in character and ability – even opposites in many respects, she right-handed, me left - but always taken together not singly. This was another connection I did not make at the time I was writing.” (More on her twin sister below.)

The first clues about the war setting come with breakfast (“porridge… as solid as bread, much solider in lumps, and slippery too”) when Bunty tells Charlotte-as-Clare, “Miss Bite says it’s doing your bit, to eat things you don’t like… I don’t see how it hurts Germans myself, eating nasty porridge.”

In September 1918, the war is drawing to a close. We as readers know it is nearly over, but the girls at school don’t, and it still affects their everyday lives. There are air raid alarms in the middle of the night, and an army training camp nearby with soldiers dressed in khaki, who “strolled casually about or marched stiffly up and down.”  Injured soldiers arrive home on the hospital trains. A girl with a German surname is ostracised by the others, and the teachers, girls and nearby villagers have fiancés, fathers or sons away fighting in France; some of them won’t ever come back.

Part Three only takes up about 25 pages but it brings the story to a perfect, poignant ending.

You can find lots of lots of different covers, some of which are better than others.

About the author
A number of excellent fiction writers are called Penelope. This writer is not Penelope Mortimer or Penelope Fitzgerald or (another of my favourites) Penelope Lively.

Penelope Farmer was born in 1939. At first glance, there isn’t a lot of information about her online, but the New York Review says that she published her first book of short stories for children, The China People, in 1960 and writes novels for adults and children, including several books about Charlotte and her sister Emma.  (We also had Emma in winter when I was a child, which I enjoyed - but not as much as Charlotte sometimes.)

There is some biographical material about her here (including more fascinating twin info about the circumstances of her birth).

However, an absorbing article in the Guardian reveals a lot about her family life. Written in 2007, it describes the events of 16 years before when her twin sister lay dying in hospital in Oxford, and the connection that developed between her and the daughters of the woman who was dying in the next bed. It is a sad, moving and yet lovely story, all hinging on a chance meeting in the street.

Later, living in Lanzarote in the Canary Islands, she wrote about starting a blog called grannyp (“Old writers may not die, but they do have to move on. Thank God for the internet”) but it doesn’t seem to go beyond 2010.

Things I didn’t know
I didn’t know anything at all about Penelope Farmer. It has been a delight to find out all this info about her, and this remains one of my favourite books.

And how many children’s books have inspired songs? This one inspired a song by The Cure, called Charlotte Sometimes and full of quotations.  This Smashwords blog article points to two other blog postings that talk about the copyright implications, the impact it had on her sales, how Penelope Farmer actually got to meet the Cure at one of their concerts, how she signed a copy of the Puffin edition for Robert Smith (who told her that his older brother read him the story at bedtime when he was about 12, and “it never got out of my head”) and how she enjoyed her own “brief moment of pop glory” when they played the song as an encore at the end of the concert.
You can read them here and here (scroll down to the entry for June 12).

Have you read it?
Have you read this book? If so, I hope you loved it as much as I do. Let me know what you think!
Posted by Philippa Werry at 01:43