The Mozart question by Michael Morpurgo

75 pages (but a small size, so quite short); gorgeous watercolour illustrations of Venice and sobering, muted ones of the scenes at the concentration camps

Subjects: World War Two, Jews, concentration camps, music, junior fiction (Year 6-8, but have to be ready to hear about the Holocaust) 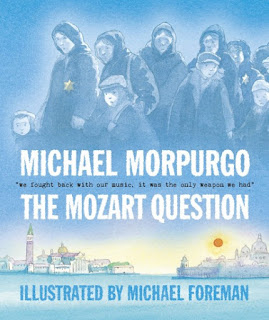 Synopsis
I can’t better the synopsis on Michael Morpurgo’s own website:
“When Lesley is sent to Venice to interview world-renowned violinist Paulo Levi on his fiftieth birthday, she cannot believe her luck. She is told that she can ask him anything at all – except the Mozart question. But it is Paulo himself who decides that it is time for the truth to be told. And so follows the story of his parents as Jewish prisoners of war, forced to play Mozart violin concerti for the enemy; how they watched fellow Jews being led off to their deaths and knew that they were playing for their lives.”

In the note at the back, the author talks about how the story grew from “the sight of a small boy in a square… in Venice, sitting one night, in his pyjamas on his tricycle, listening to a busker. He sat totally enthralled by the music that seemed to him, and to me, to be heavenly.”

What more can you say about Michael Morpurgo – he’s just amazing.
This page on his website talks about themes of war in his books.

About the illustrator
And similarly for Michael Foreman – equally amazing!
This article in the Guardian profiles his 50-year career.

Other books you might like:
War horse and Private Peaceful, both by Michael Morpurgo,  War game, The general and The amazing tale of Ali Pasha by Michael Foreman