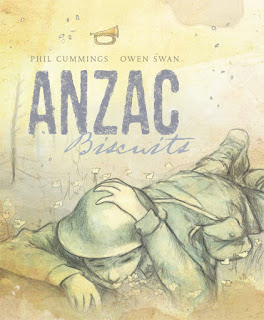 Synopsis
This book seems to be set during World War One but that is never actually stated, although there are clues (barbed wire, choking smells, snow, trenches suggest Europe; the “smell of burning red gum” suggests Australia).

The story, told in very few words, alternates between Rachel and her mother baking biscuits in their cosy farmhouse, and Rachel’s father alone on the battlefield, tramping through the mud and sheltering from the weather and the gunfire. The colours alternate between warm colours and colder hues, but the two worlds are linked by mirrored words, images and actions and by a framed photograph of her father on the farmhouse wall.

I’ve said “alone” because the soldier is completely alone in almost every scene (in one spread, he is trudging behind two other men, but we can’t see their faces.) It feels odd and unusual to have a battlefield shown as being so empty, but it does underline his loneliness and separation from his family.

On the final page, the biscuits have found their way to Rachel’s father on the other side of the world. The back page blurb says: “This is a touching story of a family torn apart by war but brought together through the powerful simplicity of ANZAC biscuits.”

At first reading, I found it a bit disconcerting that Rachel and her mother could be singing, dancing and laughing. But actually I think that is a good message: that you can miss someone, but you don’t have to be miserable all the time, or feel guilty about having happy moments. (I think that’s why the empty battlefield bothered me, because many soldiers did find companionship with their mates).

Reviews:
My little bookcase calls it “a tender story of war” that “shows the private moments of families who are left behind to worry about their fathers, brothers, uncles and sons.”

Kids’ book review says it offers a gentle narrative that isn’t too scary or confronting.

Aussie reviews calls it "a lovely tale, and a beautiful way of introducing both the subject of war and the history of Anzac biscuits".

Questions:
“The soldier bravely lifted his head to peer across the fields.” I’m still wondering about this line - is he brave or not? Shouldn’t he be keeping his head down?

About the author
You can see Phil Cummings' website here. You can also watch him talk about Anzac biscuits and his inspiration or the book.

About the illustrator
You can read about Owen Swan and some of the other books he has illustrated here.

Other books you might like
The Anzac puppy by Peter Millett is another non-confrontational book about war for this age group.