This week my new book on Armistice Day is being launched, and it seemed a good time to review this book on Sadako and her work for peace.

A longer version for older children is called Sadako and the thousand paper cranes. 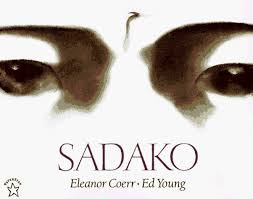 Sadako Sasaki was just two years old when the atomic bomb was dropped over her home town, Hiroshima, in 1945. She was an ordinary little girl, surrounded by a loving family, and a keen runner. The story starts with her waking up in August 1954, excited about the Peace Day events at the Peace Park. In the evening, she writes the name of her grandmother who died in the bomb blast and launches it on the river where it floats along amidst rice-paper lanterns lit up by candles.

But when she was 11, Sadako started experiencing dizzy spells and was diagnosed with leukaemia, “the atom bomb disease”. By February 1955, she was in hospital.

One day, Sadako’s best friend Chizuko came to visit her in hospital. Chizuko brought paper and scissors and cut a piece of gold paper into a square. She folded it into a paper crane and told Sadako the old Japanese story about how anyone who folded 1000 cranes would be granted a wish. Sadako knew what her wish would be to get better, so she started folding paper cranes.

Sadako didn’t get her wish and she died a few months later, on 25 October 1955, ten years after the atomic bomb was dropped.  But her name lives on, thanks to her determination, her hope for peace and her wish for a better future, and her paper cranes have now become a symbol of peace. After she died, Japanese children helped to raise money for the Children’s Peace Memorial which now stands in the Hiroshima Peace Memorial Park, with a statue of Sadako on the top, often surrounded and decorated by thousands of paper cranes from all around the world. At the base is written: “This is our cry, this is our prayer. Peace in the world”.

There is a lovely photo of Sadako and one of her paper cranes here.

You can read more here about some of the original paper cranes, kept by her brother.

Reviews:
This review on  The children's war has a picture of Sadako with her relay team and calls it an “a perfect book for introducing this difficult topic to young readers. There are no detailed graphic images described about the war, the bomb or even to after effects, only an acknowledgement of these things. There is some controversy over whether or not Sadako actually did finish folding 1,000 cranes. Regardless of whether she did or didn't, there is much to be learned from Sadako's story.

About the author
This is a nice start to Eleanor Cooer's bio on the Penguin website: “Eleanor Coerr was born in Kamsack, Saskatchewan, Canada, and grew up in Saskatoon. Two of her favorite childhood hobbies were reading and making up stories.” It also describes how her fascination with Japan began as a child, her first visit to Japan – and to Hiroshima - as a young reporter, and how she finally managed to get hold of a copy of Sadako’s autobiography, Kokeshi. so she could start writing her own book.

About the illustrator
Ed Young was born in China and later moved to Hong Kong, then went to the United States on a student visa to study architecture, but became an artist instead.  He says he draws inspiration from the philosophy of Chinese painting: “There are things that words do that pictures never can, and likewise, there are images that words can never describe.”

Other books you might like:
Hiroshima no pika, written and illustrated by Toshi Maruki, also tells the story of the day the bomb fell.

Links
You can learn more about Sadako at the Kids Peace Station, Hiroshima.