Five children on the Western Front by Kate Saunders 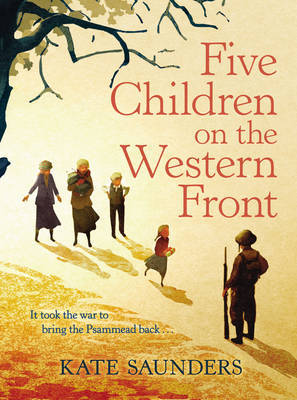 Synopsis
This book came out to much acclaim as “an epic, heart-wrenching follow-on from E. Nesbit’s Five children and It stories” (from the back cover) and won the Costa Children’s Book of the Year award.

Five Children and It was published in 1902, with two sequels: The phoenix and the carpet (1904) and The story of the amulet (1906). I read them all as a child and loved them, although I haven’t looked at them again for a long time and I’m not sure if they are as widely read today.

Because Cyril and Anthea are almost grown up and often away, Kate Saunders adds another child (Edie, aged 9) and she and the Lamb/Hilary, now 11, become the main characters. The two of them rediscover the Psammead (a grumpy, wish-granting sand fairy - “you pronounce it Sammy-ad”) and he stays with them for almost the duration of the war. The story gets sadder and the mood more sombre as it gets closer to the end.

The idea behind the book – bringing these children from their Edwardian childhood into the horrors of WW1 – is very clever. I did wonder if the theme of the  Psammead’s “repentance” could be confusing for children.

Reviews:
The Guardian calls it a “respectful homage” and says that “transplanting E Nesbit’s much-loved characters into the trenches tugs at the heartstrings in a way statistics can’t”.

“For all Saunders's delight in channelling Nesbit's Edwardian sensibilities, this is not a nostalgic book. It asks questions about lost innocence and the kind of stories we used to tell ourselves. Saunders dedicates her book "To all the boys and girls, 1914-18". Nesbit described her characters as "not bad sorts on the whole; in fact, they were rather like you". The same can be said, Saunders implies, about the doomed generation that met its fate in Flanders fields.”

About the author
In this interview in the Telegraph, Kate Saunders talks about events in her own life that background the story; some of it is very moving, and it made me think about the book in a different way.

There’s another interview with her here on BBC news.

About E Nesbit
The Edith Nesbit Society has its own website where you can read a sedate biography of Edith Nesbit (1858-1924).

But this article in the Guardian paints a rather racier (and sadder) picture of her life.

Other books you might like:
Edith Nesbit also wrote the much-loved classic The railway children, published in 1906 and never out of print since.
Posted by Philippa Werry at 00:16