The snow goose by Paul Gallico, illustrated by Peter Scott

10 chapters; 55 pages with colour and black and white illustrations

Synopsis
I’m not sure if this counts as a children’s book, but it doesn’t really fall into any other category that I can think of, and some older children would definitely enjoy it. Apparently (according to Wikipedia), it was “first published in 1940 as a short story in The Saturday Evening Post, then … expanded … to create a short novella which was first published on April 7, 1941.”

The book covers the decade from 1930 to 1940. It is set on an abandoned lighthouse on the remote Essex marches and tells the story of Philip Rhayader, a hunchbacked reclusive painter and Fritha, a young girl from the nearby fishing village. The two of them are linked in friendship and, later, unspoken love by the snow goose of the title, until Philip sails away to help in the evacuation of British troops from the beaches of Dunkirk in late May 1940. What happens to him can only be guessed by Fritha, but is told in snatches of overheard dialogue by by soldiers and naval officers.

When I went to borrow a copy from the library, I had to ask a librarian to retrieve it from the YA Fiction Nostalgia section out the back. (I didn’t even know there was such a section.) And the loveliest thing happened, which was when I gave her the title, she said. “I’m named after that book.” Her name was Fritha.

Fritha (in the library) told me about a 1970s BBC film of The snow goose, starring Richard Harris (aka Dumbledore in Harry Potter) and Jenny Agutter (from The railway children.) She said it’s hard to track down, but can be viewed on Youtube, and here it is (I'm going to watch it, and it looks wonderful.)

The original 1940 copy of The Snow Goose, as it appeared in The Saturday Evening Post is now available online.

Reviews:
If you’ve read this book, you will know it is a sad, melancholic, haunting tale. Some contemporary reviewers called the book sentimental, but it achieved near classic status almost at once and Michael Morpurgo cites it as an influence on his book War Horse.

Winter reads in The Guardian calls it a wartime classic, “a novella no thicker than a love letter, in which every sentence seems to shiver with the salt-laden chill of the desolate landscape in which it is set.” The reviewer made me think of my Fritha-in-the-library. She says, “My mother loved the story so much she wanted to call me Fritha, after the untamed Anglo-Saxon heroine. And growing up I would think of that other girl I might have been if only my resolutely unsentimental father had not intervened.”

The Guardian also put it on its list of 1000 Novels You Must Read. 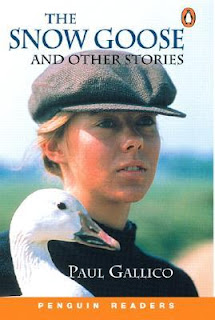 (1000 novels is a lot of reading! If you are feeling brave, here is a link to the compete list.)

Another review says it is "a moving story about love and courage, with an ending that is unforgettable."

About the author
Paul Gallico (1897 – 1976) was an American writer whose name is not often heard these days, but he used to be popular. His other well-known stories include The small miracle, about a little boy and his beloved donkey,  Thomasina (filmed by Walt Disney) and The Poseidon adventure, about a cruise ship sinking, which was also made into a movie.

About the illustrator
The Nostalgic library copy was the 1946 edition with illustrations by Peter Scott, which we had at home when I was growing up. Peter Scott (1909-1989) was the son of Antarctic explorer Sir Robert Falcon Scott, who died when he was only two years old. Famously, Scott left instructions for his wife that she should "Make the boy interested in natural history; it is better than games. Make him a strenuous man".

Peter Scott became a naval officer in WW2, and was also a famous painter, ornithologist and conservationist, who founded the Wildlife and Wetlands Trust at Slimbridge on the Severn River estuary in Gloucester.

According to Wikipedia (again) he used his first wife Elizabeth Jane Howard as the model for Fritha – another fascinating sidebar, as I’m currently reading her wartime chronicles of the Cazalet family.  EJH was about 15 years younger than him, and had striking good looks; their marriage ended in divorce, and she later married Kingsley Amis; she died in January 2014, aged 90.

You can read more about Peter Scott's life here and here.

I never knew this and it's fascinating:
According to a story in the Telegraph in 2010, a disused lighthouse at Sutton Bridge on the Norfolk Wash provided the inspiration for the setting of this book. Peter Scott rented it for £5 a year in the 1930s, and was visited every year by a pink-footed goose that he called Annabel. Gallico, who was a friend of his, transformed the timing (to wartime), the setting (to Essex) and the bird (to a snow goose.) The story is told in more detail on the website of Sutton Bridge village.

If you visit the area, you can go on the Peter Scott walk, which follows the old sea bank along the Wash from King's Lynn, to the Peter Scott lighthouse at Sutton Bridge.

The dolphin crossing by Jill Paton Walsh tells the story of two school boys who take a small boat across the Channel to help in the evacuation of Dunkirk.

The story of Dunkirk
The evacuation from Dunkirk took place over ten days from late May to early June 1940, and ten days later, German troops entered Paris. It's true that hundreds of small boats sailed across the Channel to help take men off the beaches. You can read more about Dunkirk here and listen to Voices from Dunkirk in the words of eight survivors here.

You can also see some images of the evacuation on the Imperial War Museum site.