Rose under fire by Elizabeth Wein Synopsis
It’s August, 1944. Rose Moyer Justice, aged 18, from a Pennsylvania Dutch family in the United States, has come to England to work for the British Air Transport Auxiliary. Rose’s family is obviously wealthy and she learnt to fly at the age of 12, so she is quite confident delivering planes to bases all over the country.

Rose is keen to fly to France as well, and gets permission to do so a few days after Paris has been freed in September 1944 but her return flight goes wrong when she is captured in the air by German planes and made to land at an airfield in Germany. From there, she is taken to Ravensbrück concentration camp where she is registered as a French political prisoner, despite having an American passport.

Rose makes friends at the camp, including Irina, a Russian pilot, and a young Polish girl called Roza, one of the group known as Rabbits who have been used for medical experiments by the Nazis. Everyone is treated badly in the camp, but the women are determined that the story of the brutality meted out to the Rabbits should reach the outside world. Rose, an aspiring poet, comforts them with poems by her favourite writer, Edna St Vincent Millay, and also makes up a poem to remember their names. She doesn’t let on that she has already heard reports about their treatment on the wireless and dismissed them as propaganda.

There is little let-up from the grim scenes at the camp, which take up 200 of the 360 pages. The events and living conditions are not dwelt on gratuitously, but they are still stomach-churning if you stop to think of the implications or to imagine the reality. Readers who only know of the camps from Anne Frank’s diary – which stops, of course, before she arrives there – will find this a very different, and possibly difficult reading experience.

The story of how Rose readjusts to outside life takes up the last section of the book (which is where the Nuremburg Trials come into it.) In some ways, this widens the scope of the book as it relates to how anyone who has been through trauma comes to terms with it. 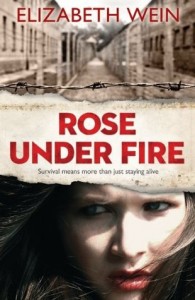 Reviews:
This review on Gossamer obsessions calls it "definitely a darker, bleaker novel than Verity." The review does raise the point - which I was aware of as I read - that the diary nature of the book works “for and against” it. Rose can’t keep a diary in Ravensbrück (or it would have stretched credibility if she had been able to write one in sufficient detail and smuggle it out  as well) so that portion of the story is written while she is staying in a hotel in Paris after her release. But that means we realise she has escaped to safety, which takes away some of the tension of the events described. The only (slight) tension left is that we know something about her boyfriend, Nick, that she doesn’t yet know. Rose has lost touch with her concentration camp friends, but we expect she will find them again.

The Los Angeles times called the book "a soaring tale of triumph."

Author’s website
Elizabeth Wein has written books set in Arthurian Britain and sixth century Ethiopia. Code name Verity is about a female pilot who is captured in France; her story is mentioned in Rose under fire, because the character of Maddie connects the two pilots.

There is an interview with Elizabeth Wein here on the girls like giants blog.
And it’s also interesting to note that she is a pilot herself.

From another interview in the Vancouver Sun:
Q Why did you write this book?

A I think that the dark underbelly of women’s wartime roles is fascinating. My previous novel, Code Name Verity, takes an inside look at the dangerous and dirty work that women did as spies and saboteurs for resistance movements in Nazi occupied Europe. Rose Under Fire more or less continues the story of these women — about a third of those sent into occupied France ended their lives as prisoners in concentration camps. I was particularly fascinated with Ravensbrück because it was a camp specifically for women. It was operated differently from other camps; its history is not well known and is worth knowing.

Other books you might like:
There must be very few books written about women in concentration camps, compared to the large number of books about men in that situation. The books that spring to mind are escape stories, like The great escape, so they are more “heroic” in nature, and perhaps it was simply impossible for women to even try to escape – how would they have survived outside?

NZ connections:
You can read my review of Code name Verity for more details about the Air Transport Auxiliary, including a brief profile of Jane Winstone, one of the few NZers in the ATA.

Things I didn’t know
It’s a side issue, but I didn’t know that the emigrants who settled in Pennsylvania Dutch Country in the USA (incl the Amish) weren’t named because they were Dutch, but because of the dialect of the language they spoke. They came from a number of German-speaking areas in Europe, such as Alsace in France, Switzerland and Germany. This adds an extra layer of irony of the story, in that Rose is being held captive in the land where her family came from.

If you want to, you can read more about the Nuremburg Trial or the Polish Rabbits, but some of this material is confronting.

Ravensbrück is now a museum. More than 132,000 women and children from twenty-three countries passed through this concentration camp…At least 92,000 of them perished. They were gassed, shot, beaten and starved to death; or they died from sadistic medical experiments or exposure or dis­ease or exhaustion, or just be­cause they gave up trying to survive.

A low stone wall newly built by the lakeside bears a chiseled inscription in German by the East German writer Anna Seghers. It reads: “The women of Ravensbrück are the mothers and sisters of us all. You would not have been able to learn and play in liberty—indeed you might even not have been born—if women like these had not placed their delicate, weak bodies as a steel shield before you and your future.”

One of those who died Ravensbrück was Violette Szabo, the legendary SOE special agent. There is a poignant story about her training when she was trying to commit a poem to memory (this was a device to help code messages, using words from the poem. ) It was best not to choose well known poems in case the enemy could recognise them, and it was important to get the words and the spelling of the chosen poem exactly right.  Violette kept making mistakes until the SOE codemaster, Leo Marks, gave her a new poem to learn. It was simple but memorable and it worked for Violette. Leo Marks had written the poem himself after the woman he loved had been killed in a plane crash.