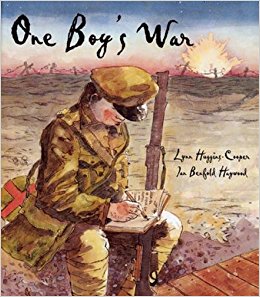 Synopsis
The blurb gives an excellent summary:
“It is 1914 and 16-year-old Sydney is bursting to get a crack at the Kaiser. Fired up by the military recruitment campaigns and the brave men going to fight in the Great War, he runs away to enlist, but soon finds himself in a frontline trench where reality - and the rats - begin to bite. Told through Sydney’s optimistic letters home and his journal, this is his honest portrayal of the disillusionment and degradation in the trenches of World War I.”

The Dedication is “for Sydney Dobson” and the Afterword reveals that Sydney was a real young man, born in County Durham in the north of England, who died in the war in Belgium.

I have to say I preferred this book to My mother’s eyes: the story of a boy soldier which deals with a very similar topic, although based on an Australian, not an English boy. I found the point of view more convincing, in that all the events were clearly seen or through Sydney’s eyes (“I’m joining up. Ma’s smothering me”.) For example, the spread of the women waving encouragement to the men going up the steps to sign up shows the effect that would have had on him. So does the following page, with the sergeant bellowing at the boys in training.

I like the way that not everything is spelt out. Sydney’s mother reads his first letter against the backdrop of a munitions factory where she must be working now.

I also found very moving the way that the mood of the illustrations changes, from the warm, homely scenes of Durham to the grey scenes in the trenches, and the way that Sydney tries to shield his mother from the true knowledge of what he is going through by self-censoring his letters. On one page he says,” I’d give anything to be back at home.” On the next page he writes, "Dear Ma, don’t believe all the scaremongering in the papers. It’s not too bad.”

The descriptions of the weather and of life in the trenches (trench foot, shell shock, lice, rats) are simple but powerful:

“A shell hit nearby today. It was the strangest thing I've ever seen. A wall of mud rose up where the shell hit, and surged towards us. It broke over our heads like a wave, covering us in mud and stones.”

Reviews:
There is a review on Books for Keeps and another one on Kirkus Review.

There's even an online review on Youtube whcih shows you the book and pictures.

Author’s website
Lynn Huggins-Cooper's blog can be found on An awfully big blog adventure ("the ramblings of a few scattered authors") and she also has a Facebook page which shows you the variety of stuff she writes (over 200 books).

Info about the illustrator
This is Ian Benfold Hayward's website.

Other books you might like:
The horses didn’t come home by Pamela Rushby tells the story of two Australian boys who sign up at 16 and go off to serve with the Light Horse.
Charlie and Tommo in Private Peaceful sign up at nearly 16, so does William in My mother’s eyes: the story of a boysoldier, and the boys in War game are very young as well.
“Boy soldiers” by Norman Bilbrough in School Journal, Part 4, No 3, 2008 tells the story of two young soldiers, Stan Stanfield and Len Coley, who fought in World War One.