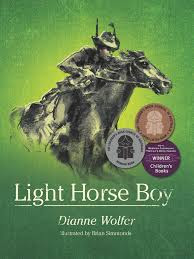 Synopsis:
Jim is a young Australian boy, not yet 18, who works as a farrier (someone who trims and shoes horses’ hooves.) His best mate Charlie reckons that when the army recruiting officers see how well they can ride, they won’t ask for a birth certificate, and so it turns out. Jim and Charlie sail with the fleet from Albany in 1914, and wave goodbye to the lighthouse keeper’s daughter, Fay, who features in Lighthouse girl.

The story is told in a mixture of narrative, illustrations, photographs, and Jim’s letters and postcards back to his younger sister Alice, who is working as a governess. On the way over, Jim is chosen to work as a farrier on the flagship Orvieto. That means he has to leave his mates and his own horse, Breaker, but on the Orvieto, he looks after Major General Bridge’s horse Sandy, and gets to know the Major himself.  He meets up with Charlie again in Egypt, where they camp in the desert, walk alongside the River Nile, visit the pyramids, race camels and leave their kangaroo mascot Rufus at the Cairo Zoo. They are sent to Gallipoli (without their horses) where they see the first of their good mates die in the landings on April 25th 1915. Later Charlie dies in the battle of Lone Pine.

Back in Egypt, Jim takes part in the battles of the Desert Campaign. After being wounded in an explosion, he ends up on a hospital ship on his way to England, and is transferred to a hospital for the blind. Eventually, on his way back to Australia, he finds a surprise below decks that helps him start the process of inward healing. There are a couple more surprises in the final pages.

The book is full of good Aussie slang (Charlie says they will make ”crackerjack soldiers”, and Jim says it’s “bonza” being back with  his mates) and the story of the Light Horse soldiers is a fascinating one, that is less familiar than the stories of Gallipoli and the Western Front. Children who like horses will find it especially interesting as there are lots of descriptions of how the horses are cared for.

Reviews:
There are reviews of this book on the Aussie Reviews site and on Buzz Words books. (This latter reviewer points out that the black charcoal sketches suit the story because they capture "the seriousness and sadness of war".)

This interview and review describes some of the research behind the writing of the book.

Questions:
At the end of the war, “many soldiers chose to shoot their beloved Walers [horses] rather than leave them behind to an unknown fate.” Why did they do that? What would have happened to the horses otherwise? 
There is a bio of her on the Fremantle Press site.

The illustrator is Brian Simmonds and you can read about his work here.

Other books you might like:
Light Horse Boy is a companion novel to Dianne Wolfer’s earlier book, Lighthouse girl, which is based on the true story of Fay Howe. Fay lived on the Breaksea Island lighthouse, near Albany where the troopships departed from. She was proficient at semaphore and used to take down messages for the troops and send them to their families, as their last farewell before they left Australia.

Evan’s Gallipoli tells a very different story, but one that overlaps in time and sometimes in location.

New Zealand connections:
The New Zealand Mounted Rifles fought with the Australian Light Horse in the deserts of the Middle East during World War One. You can read about the different units here.

The New Zealand Mounted Rifles Brigade left New Zealand with the Main Body of the NZEF in October 1914. The mounted riflemen fought in Gallipoli, Egypt and Palestine. They sometimes fought from horseback, and sometimes (as when they went to Gallipoli) they left their horses behind. But usually they would ride to the scene of action and then dismount before going into battle. One man in each group of four would then look after those four horses, as happens in Light Horse Boy.

They were fine horses, and not many of them ever came back to Australia or New Zealand. Dianne Wolfer says in her introduction that of the 136,000 horses that left Australia, only one returned. That was Sandy, the horse belonging to Major General Sir William Bridges. The Major General was killed at Gallipoli and was the only Australian to be returned to his homeland for burial.

Four of the 10,000 New Zealand horses returned home, and the most famous of them is Bess. You can read about her on pg 32 of Anzac Day:the New Zealand story. There is a memorial to her near Bulls. Bess was also the model for the horse on top of the Cenotaph in Wellington.

A mounted rifleman in uniform sits among a group of farriers, photographed by Laurie Mackie in the World War I military camp at Zeitoun in Egypt, 1914. The farriers are holding equipment for horse shoeing, including hammers and bars.