The machine gunners by Robert Westall 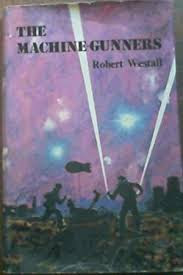 Synopsis
The machine gunners is set in north-eastern England in 1940-41. We often read about the bombing on London - the Blitz and the deadly V2s later in the war – but forget how other parts of England were affected. Tyneside (around Newcastle, or the fictional Garmouth in this story) is surprisingly close to Germany on the map, and it was the focus of many bombing raids at this time, often as devastating as the ones that were targeting London.

Chas is one of the local kids who hang around bomb sites, foraging for items (machine gun bullets, pieces of shrapnel, tail fins, nose cones) to add to their collections of war souvenirs. Their parents, worn out by sleepless nights, food shortages and warden duties, don’t care too much what they are up to, as long as they are safe in the Anderson shelters when the alarm goes.

Then Chas finds a crashed German plane in the woods, with a dead German gunner slumped inside, and the machinegun turret still attached. He calls in a gang of others to help – Cem (short for Cemetery Jones), Clogger, Audrey and Nicky - and they end up with not only the machine gun, but also an elaborate underground bomb shelter in the grounds of a ruined house and Rudi, a captured German airman. Meanwhile, the local Home Guard officer is aware that the machine gun is missing, suspects that local kids are involved and is desperately trying to retrieve it before disaster strikes.

The author comments that the plot was inspired by a newspaper article about a gang of Dutch children who found a wrecked Allied bomber long after the war, in 1969. They managed to “remove its rear gun turret, transport it several miles to their den, clean and repair it and were about to fire it when the Dutch police finally caught up with them”.  He adds that one night in 1941, some people on Tyneside really believed the German invasion had begun.

Some of the dialogue is written in dialect, especially Clogger’s (from Glasgow), which isn’t always easy to follow. But it is could work well as a book for a teacher to read out to a class. The idea of children working together, with little parental supervision, and finding warmth and acceptance in their gang, provides a very different slant on war.

It has been a popular book over the years, especially in English schools, and there are lots of different covers. 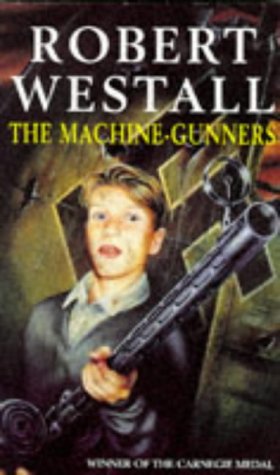 Reviews
A musical adaptation was first staged in 1998, and later appeared at the Edinburgh Fringe Festival.

About the author
Robert Westall, according to the blurb on the back flap, “was a schoolboy in Tyneside during the war years” (later he went into the army and then became a teacher) which must be why the passages about the bombing raids and their aftermath – like when Chas and his dad make their way across town to try and find out if his grandparents are still alive - seem so authentic.

Other books you might like
Ronnie’s war by Bernard Ashley (the scene where Ronnie goes to look for his mother is another dramatic description of the aftermath of an air raid).

Things I didn’t know
I didn’t know that school started late if the raids had gone on late the previous night (in the opening chapter, Chas wakes in the air raid shelter after a raid that went on past midnight, so school doesn’t start until 10.30am). I didn’t know how important it was to have your insurance policies with you when you ran for the shelter in your back year, in case your house was destroyed. And I didn’t realise that wardens were unpaid and had to do their warden duties at night on top of a job during the day.

NZ connections
The final chapters – with the arrival of the Polish Free Army
and non-arrival of the Germans – have semi-comic moments but pose a real question about what you would do and how your family might react to a possible invasion. In WW2, many people in Australia and New Zealand feared that a Japanese invasion was imminent, and I’ve heard stories from people about how their families had planned to retreat to farms in the countryside if that happened.