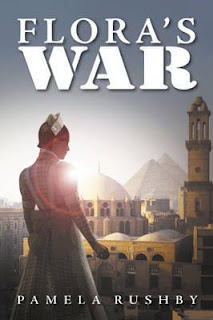 Synopsis
(From the back cover): "It’s 1915 and sixteen year old Australian, Flora Wentworth, is visiting Cairo with her archaeologist father. She watches with growing alarm as first a trickle and then a flood of wounded soldiers are shipped into the city from Gallipoli….As Flora battles to save lives and find her own, a tragic misunderstanding changes everything…"

Reviews:
There are two good reviews here and here. Both mention the way in which the author contrasts the hectic social life of Cairo in 1914 and even early 1915 with the changes that war brings.

Other books you might like:
The horses didn’t come home, also by Pamela Rushby (January 2014) describes a visit to an archaeological dig. My review of that book on my blog includes info on the finding in 1922 of Tutankhamen.

Evan's Gallipoli by Kerry Greenwood (October 2013) is a book by another Australian author which has some parallels in the relationship between (vague) father and (confident) child.

Things I didn’t know
Pamela Rushby says in the Author’s note that she was carrying out some early research on WW1 nurses, but what really “grabbed her imagination” was “an entirely different story. Cairo’s story.” The city was “overwhelmed” with wounded soldiers  were sent back from Gallipoli and many hotels and public buildings were turned into hospitals or convalescent homes, with medical staff worked off their feet in trying conditions and volunteers helping as much as possible.

She paints a convincing picture of the city and its streets and buildings, never letting us forget the history on its outskirts or the ever present heat and dust. I would love to visit the real-life inspiration for the House of the Butcher and Blacksmith (Flora’s home): the Gayer-Anderson Museum. (According to Lonely Planet, this was used as a location for the James Bond movie The spy who loved me!)

Links
Flora and her friend Gwen help out as volunteers at Lady Bellamy’s (very proper) rest and recreation centre, and also on the hospital wards. They make friends with the Australian nurses in Cairo (the first NZ nurses arrived after the 25 April landing at Gallipoli; they were at least in their mid-20s, so would have been quite a bit older than Flora and Gwen.)

Some of Flora and Gwen's friends depart to work in hospitals on Lemnos or on the hospital ships, so we hear about their nursing work through letters or conversation.  Other actual events such as the riots in the Wozzer are also covered.

There are some amazing photos and stories in this AWM exhibition on the Great War nurses.

You can also read about the nurses' experience of Gallipoli from their letters.