The Anzac puppy by Peter Millett and Trish Bowles

Freda is a Dalmatian puppy owned by Lucy’s family. They can’t afford to keep her and she is adopted by a young soldier called Sam who promises to bring her back to Lucy “safe and sound” after the war. Freda becomes his good luck mascot, and the memory of the promise he made keeps him brave amidst the terror of the trenches. There are many recorded examples of dogs and other animals whom the troops adopted as their mascots, and they really did play an important role in helping to keep the soldiers' morale up.

Freda gets bigger, Sam gets older, the war goes on until one day at last “the roaring guns fell silent.” Sam goes back with Freda to fulfil his promise to Lucy, and…(here's a clue: it's a happy ending.)

Author’s website
Peter Millett lives on the North Shore and is a part-time writer and a full-time house dad. He started writing for children in 1998. His books published since then include The Anzac Biscuit Man and Other Classic Kiwi Tales (Reed 2007) and Boy Zero Wannabe Hero (shortlisted for the LIANZA book awards 2011)

In his website, he explains that “the fictional story 'The Anzac Puppy' was inspired a by a series of true events that took place during the Great War of 1914-18.” These true events are described in a two-page spread of historical notes at the back.

You can read an interview with Peter here.

Info about the illustrator
Trish Bowles is a self-taught artist who lives in Christchurch and has illustrated more than 20 children's books.

I'm sure children will find her style of illustration very appealing, especially the picture of Freda sitting in her box on the pavement under the sign "Puppy free to a good home". The cover also shows a nice juxtaposition of war-related images (uniforms, airplanes, soldiers with guns, handwritten letters home) with the puppy peeping out of Sam's knapsack in the foreground.

Other books you might like:
Caesar the Anzac dog by Patricia Stroud, illustrated by Bruce Potter (Harper Collins, 2003; reprinted in 2009, with extra content, as Caesar: The True Story of a Canine ANZAC Hero)

NZ connections:
I knew about Freda, the Great Dane (or possibly Dalmatian) mascot of the New Zealand Rifle Brigade at their training camp at Cannock Chase in England. You can read about her here.


I did some research on Freda and found someone in England who kindly went out on Cannock Chase to get me a photo of her grave for my Anzac Day book. However I didn’t know the story about Sergeant Ashby and the real life Freda which Peter tells at the back of the book. 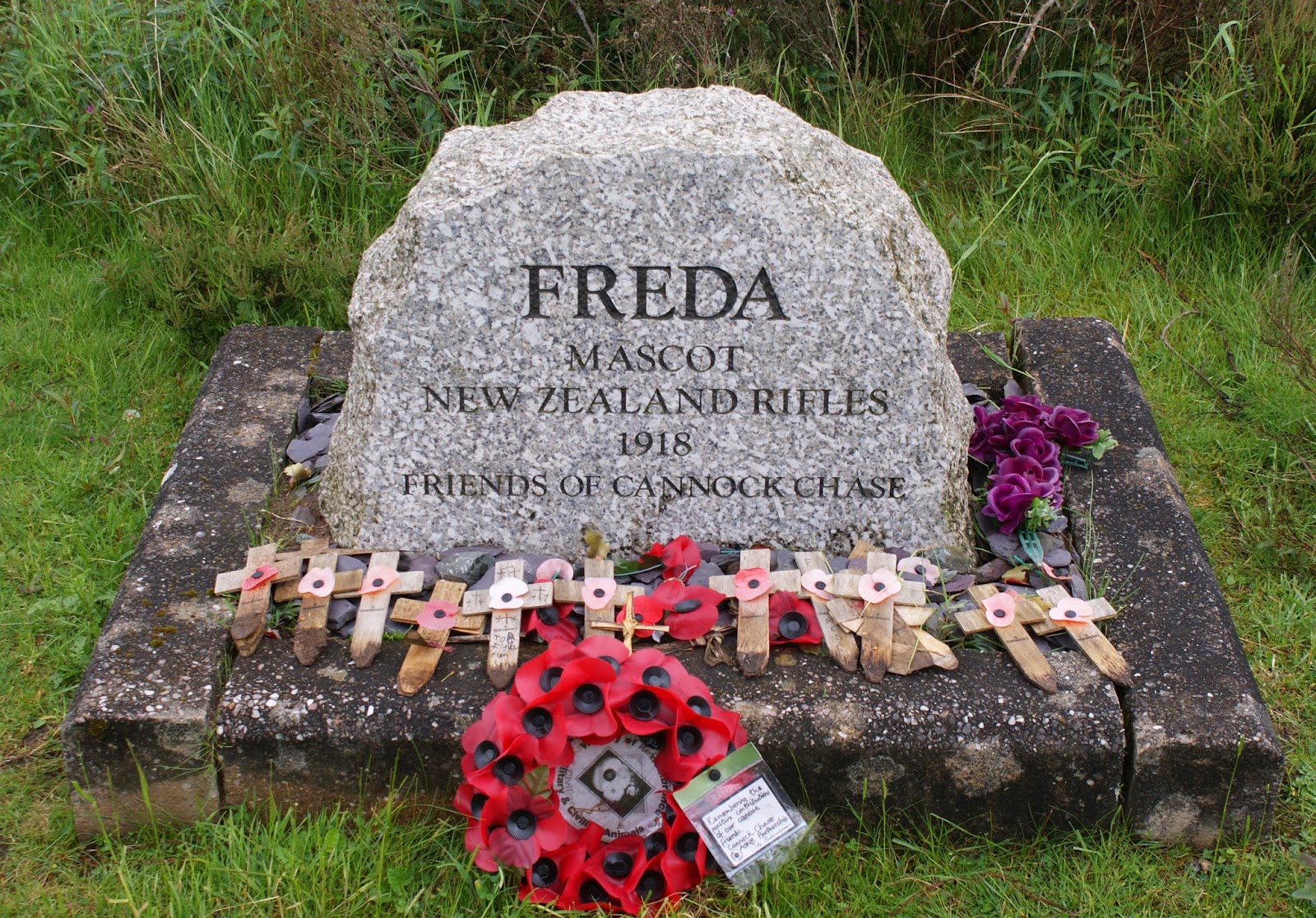 Cannock Chase
Cannock Chase is an area of pine forests, woodland and open heath in the county of Staffordshire. In England, a “chase” is an area of unenclosed land formerly reserved for hunting, so in medieval times it was a royal hunting forest. Today it has lots of walking and biking trails and also contains several war cemeteries and memorials.

During WW1, the Chase was the site of a large military camp (used by the NZ Rifle Brigade) and also a prisoner of war hospital. Men who died at the camp (many of them from the influenza pandemic) and in the hospital are buried in the Cannock Chase War Cemetery which contains the graves of 73 New Zealanders and 286 German POWs.  You can find it on the map here. The Anzac Day Commemoration Service which takes place at there is one of the largest outside Australia and NZ.

After Freda died in 1918, she was buried at Cannock Chase and members of the Rifle Brigade put up a headstone (since replaced by a newer one)  in her memory. On Armistice Day 2010, a special ceremony for working dogs took place at her grave, to remember and celebrate their “loyalty and service.”

Model WW1 battlefield at Cannock Chase
I’d never heard about this before. Completely off the topic of the Anzac puppy, but fascinating!

“In June 1917, soldiers from the New Zealand Rifle Brigade held off stiff resistance from German forces in the Belgian town [of Messines], near the French border, to take control of a ridge regarded as strategically important in setting up the later assault on Passchendaele.
On their return to the UK from the Western Front, troops sketched out in minute detail replica trenches, terrain, contours, and obstacles before it was rendered in concrete. They used German POWs to do the hard labour and make small-scale reconstructions of Messines' buildings, including its church, railway lines, and roads. The mock-up was then used as a training aid for soldiers coming through Brocton Camp in Staffordshire.”
The practice battlefield was uncovered by archaeologists in 2013. You can read more about what they discovered here and here.
The Dolores Cross Project
It’s very nice to see the publisher’s acknowledgements to historians Marion Kettle and Dolores Ho “for the extensive research they undertook to preserve Freda’s memory”. I haven’t worked with Marion, but I’ve had contact several times with Dolores and she's always been unfailingly helpful.

I’ve been interested to learn about her own war-related project, the Dolores Cross Project, which aims “to personally pay tribute to approximately 30,000 New Zealand military personnel buried on foreign soil with a hand-made tribute.”

In fact Dolores began her Cross project at Cannock Chase. She was there for Anzac Day 2008 (see the History section of this page of her blog) and wanted to place RSA poppies on the graves, but didn’t have enough so made some flax crosses to make up the shortfall.