68 pgs (unnumbered); no contents page, but 3 short chapters (The kickoff, The adventure, To the front) and one long chapter (No-man’s-land.) Four boys from the same village in Suffolk - Will, Lacey, Billy and Freddie – dream of playing soccer for England, but instead they sign up in August 1914 to go to war. Life in the trenches is miserable and the war shows no sign of ending. Then on Christmas Day, a miracle happens. British and German soldiers start to sing carols, the Germans put up lighted Christmas trees and both sides meet in the middle to exchange Christmas wishes. A game of football starts and for a while, the young men make up two opposing sports teams, not two sides at war.

The book contains lots of full page illustrations, with some small fact boxes and a few reproductions of newspaper articles and advertisements. The endpapers contain examples of recruiting posters.

Make sure you look at the dedication to the author’s four uncles who died in the Great War.

There is a fascinating website about the Christmas truce here. It has been put together by two English journalists who are encouraging volunteers to search through old newspapers and local archives for details of the 1914 Christmas truce (which took place all along the lines, and was larger than just this one football match.)

Reviews:
There is a short review of the book on the Booktrust website.

Questions:
What made boys like Will, Lacey, Billy and Freddie decide to join up?
What did they expect the war to be like? When did they realise they might be wrong? What was it like?
The last four pages contain only pictures, no words. What do you think happens at the end? Why did Michael Foreman choose to finish the book like this? If you wanted to write some final words to go with the pictures, what would they be?

Information about the author:
http://www.walker.co.uk/contributors/Michael-Foreman-2741.aspx
http://www.penguin.co.uk/nf/Author/AuthorPage/0,,1000010989,00.html
http://www.lovereading4kids.co.uk/author/1043/Michael-Foreman.html
http://www.guardian.co.uk/books/2011/mar/07/michael-foreman-general-children-illustrator
Michael Foreman is primarily an illustrator, but his book War boy : a wartime childhood tells of growing up (he was born in 1938) in an English fishing village during World War Two. It is followed by After the war was over. He has also illustrated two other war stories, Billy the kid and Farm boy (both by Michael Morpurgo.) His very first book, The General, is an anti-war story (written in 1961 during the Cold War) about General Jodhpur who suddenly notices the beauty of grass, flowers and nature when he falls off his horse, and decides to concentrate on peace, not war, from then on.

Other books you might like:
The duck in the gun by Joy Cowley has a similar anti-war message to The General.
Private Peaceful by Michael Morpurgo also shows the pressure put on young men to join up.
One of the letters in Harry and the Anzac poppy by John Lockyer describes the misery of being in the trenches on Christmas Day, longing for home, with nothing for dinner except bully beef stew.
Near the end of War game, Will finds himself in a shell hole with a German soldier. Read The red poppy by David Hill for another similar encounter.

"Football has a long history, and some of it is tied up with war. In 1914, when the First World War broke out, football was the most popular national sport, especially with young men just the right age to fight for their country. Entire football teams joined up to fight together, and some died together too.
Many footballers joined up in the Second World War too, and many lost their lives.
This site tells some of their stories and looks at how the Commonwealth War Graves Commission remembers them by recording their details and looking after their graves and memorials."

New Zealand connections:
When war was declared in August 1914, many people thought it would be over by Christmas. Men from New Zealand and Australia hurried to enlist so they didn’t miss out. They knew it would take weeks to get there by ship and worried that the fighting would be finished by the time they arrived, but in fact it dragged on for four more years.

For the first Christmas of the war, 17-year-old Princess Mary (daughter of King George V) sent all the troops a Christmas gift: a brass tin containing tobacco, sweets, pencils, a card and a picture of her. You can read more about the Christmas tins on the Museum Victoria site.

This one belonged to Hami Grace, whose story is told on pg 22 of Anzac Day: the New Zealand story in the section called “Maori in the Great War”. 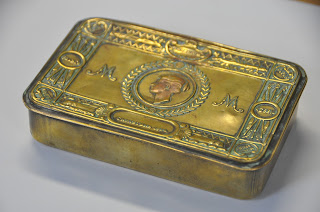 If you go to the National Library website and search on ”Christmas” and “war”, then filter the results by type (Images) and date (1910s), you will find some photographs of wartime Christmas celebrations.

The Christmas football game is not the only occasion when soldiers from opposing sides met in a temporary truce. In May 1915, a ceasefire was arranged at Gallipoli so both sides could bury their dead (see pg 15 of Anzac Day: the New Zealand story in the section called “A long, tough campaign”.) One story goes that only Australian soldiers who were over six foot (1.8m) tall were chosen for this job, so the Turks would think that all the Australians were that big.

The bodies were lying out in the open on no-man’s-land and it was hard to dig graves in the rocky ground, but the work was lightened by the fact that the men could walk around freely in the open for once without having to worry about being hit by snipers or shells. Soldiers from each side talked together (in sign language if they didn’t have a common language) and swapped cigarettes and food. At the end of the day, they went back to their own trenches and the war started up again.